If you’ve been reading the major blogs and genre fiction news sites recently then you’ve surely heard about the launch earlier this year of The David Gemmell Legend Award for Fantasy.

Here at Orbit we’re delighted that David Gemmell’s memory – and his truly massive contribution to the development of fantasy fiction before his tragic and untimely death in 2006 – is being honoured by the launch of this new award, which, in the words of the introduction on the award website “will be given to a work written in the ‘spirit’ of the late, great David Gemmell, a true Master of Heroic Fantasy.”

Stan Nicholls (author of Orcs, which we published recently in the US) is a member of the initial steering committee that came together to establish the award. So we thought he’d be an ideal person to tell us how the award came about, and how its unique processes and mechanism will hopefully result in a genuine, all-round winner of the very highest quality being named when the first award is presented, next June. 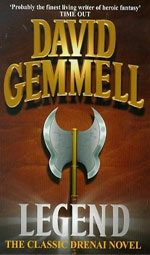 Orbit: How did the David Gemmell Award come about, and who was the driving force behind establishing it?

Stan Nicholls: David Gemmell’s death in 2006 was a terrible shock for his friends and colleagues, and there was a general feeling that it would be fitting to commemorate him in some way. It was author David Lee Stone who first mooted the idea of an award in Dave’s name. That lead to a group of people, including myself, coming together to try and establish it.

Davey Stone’s suggestion was that the proposed award might be a kind of bolt-on to the British Fantasy Awards, presented at the British Fantasy Society’s annual Fantasycon. But, to cut a long story short, it proved too difficult to reach an agreement with the BFS about the nature and administration of the award, and the idea went into abeyance. Not that we abandoned it; we just sort of retreated for a rethink.

As so often happens in these situations, it took one determined individual to get the thing up and running. That was Deborah Miller, another friend of David’s, who, to put it bluntly, decided to cut through the crap and endless discussion we’d fallen into and get the show on the road again. It was an object lesson in how sometimes you need a benevolent dictator rather than a chorus of diverse voices to make progress.

A few months ago Deborah secured the blessing of Dave’s widow, Stella, set up a website to float the idea, and contacted the core group of us who want to see this award happen. She was kind enough to ask me to Chair a steering committee, which I was more than happy to do; though our intention is to have an election at some point so that those administering the award are selected democratically. It’s important to us that this prize and the running of it are as transparent as possible.

So it was Davey Stone who had the idea and Deborah Miller who finally ran with it. But I have to stress that this is a group effort – there’s a dedicated band of people beavering away on the myriad details.

Orbit: The award has a fairly unique procedural setup, with initial nominations made by editors at publishing houses, then an online popular vote generating a shortlist that’s then judged by a panel to decide the winner. How was this particular system decided upon, an what do you think are its unique benefits?

Stan Nicholls: What we’ve come up with, after a great deal of discussion, is a mechanism that seemed the most workable. But nothing’s set in stone. We’re receptive to different ways of doing it if they’re more efficient and even-handed.

In fact, we’ve already decided that the longlist, which consists of titles put forward by publishers, can be added to by anybody. So if people think a book’s worthy of inclusion they’re free to nominate it.

We’ve had a lot of debate about how the eventual winner is going to be decided. Our instinct is that readers should be able to vote at every stage, so that the outcome will truly be a popular decision. The only problem with that is how we stop fans of a particular author getting together to vote as a block and influencing the result, which has been a dilemma for other awards.

The only way we could see to avoid that was to have a panel of judges weigh up the five finalists. That method has its critics, but on the whole it seemed fairer than any alternative we were aware of. We think readers are the most important part of all this, and if anyone can come up with a more equitable way to involve them right to the finishing line, we’re listening.

Orbit: As a member of the Steering Group and judging panel, what are the main criteria by which you’ll be assessing the nominated titles in order to pick the eventual winner?

Stan Nicholls: Actually, it’s by no means certain that I’ll be one of the judges. A lot of thought’s currently going into who they might be. Our aim is to get together a panel of people who, obviously, should have an affection for fantasy and are knowledgeable about the genre, but who are also capable of coming to an impartial decision. That’s no easy task!

As to the criteria; at base, assessing which title is worthy of the Gemmell Award shouldn’t be any more problematic than reaching a decision about a prize for a science fiction, crime, mainstream or any other kind of novel. I’ll probably regret saying that. No doubt there will be some lively discussion before the winner emerges. But what I’m trying to say is that the judges will be looking for quality writing, accessibility, good character development, sound plotting, fresh ideas … all those elements that make for a fine book in any genre.

If we’re able to establish the David Gemmell Legend Award for best fantasy novel of the year as something genuinely prestigious, which is our intention, our hope is that we can expand it and add additional categories. As I said, our target is to honour a great fantasy writer, but we also reckon it’s time that fantasy as a distinct genre finally got the recognition it deserves in the form of an award that acknowledges excellence in this field. We think that’s something David Gemmell would have approved of.

Orbit: Stan, thank you very much indeed for your time.

So there you have it, folks. A new award, based on a mixture of popular vote and expert jury analysis, to be given to the very best novel of epic or heroic fantasy written in 2008 and honouring the memory of one of the finest exponents of the genre… if you’re a fantasy fan then that surely deserves your full-hearted support.

Visit the official David Gemmell Legend Award website at www.gemmellaward.com, where you can see which novels have already been long-listed, and nominate any deserving titles that you think may have been over-looked. The website is built on the Ning open source social networking platform, which means that if you sign up as a member then you can join in the conversation and of course, cast your vote when the ballot opens on December 26th this year.

We’ll be keeping in touch with Stan and Deborah and will bring you further major developments as they’re announced.