Hello everybody, I’ve just started as the Creative Director of the newly-created Orbit and Yen Press Art Department in the US. Prior to this, Orbit’s covers have been handled by the fabulous Little Brown Art Department, and they did a great job. However, now that Orbit is technically a separate division from Little Brown (and growing in leaps and bounds), it’s time for Orbit to have its very own dedicated art team. I thought it would be a nice introduction to my personal and professional taste to review a few of my favorite Orbit covers so far. It’s only been a little over a year of publishing in the US, but Orbit has already been pushing the envelope in their cover designs. This is very exciting for me as a book designer, but also as a fan. I’ve been a sci-fi/fantasy reader all my life, but I would be lying if I said I didn’t know a lot of the genre’s covers were more of a punchline than a selling point. In the last ten years, not only has the genre stepped both feet into popular culture with the influx of genre-influenced movies & TV shows, but the public at large has become much more design-aware. I think that means there’s a world of room to have covers that are recognizable to traditional genre readers and be attractive, well-designed, visually exciting covers. That said, let’s get started!

THE ELECTRIC CHURCH, THE DIGITAL PLAGUE, & THE ETERNAL PRISON by Jeff Somers

I love these covers, they’re so graphic and bright. The inky black and white illustrations next to the bold colors really jump off the shelf at you. They’re so stark you really get a feel for the tone of the books. (Also, I’m a sucker for a Jae Lee drawing)

THE ENGINEER TRILOGY by K.J. Parker

Great texture. So different from the usual fantasy look, and so fresh. 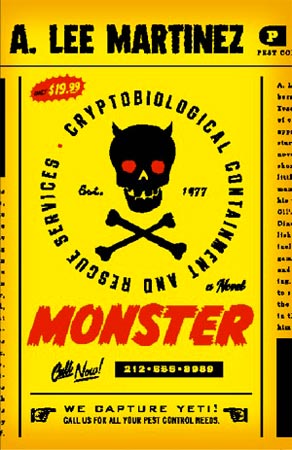 MONSTER by A. Lee Martinez

Design by Will Staehle

So fun – this cover tells you so much of what to expect from this book. It’s bold, bright, and such a fresh look compared to what you usually find on the sci-fi shelves.

Design and Illustration by Calvin Chu I put these series together not only because they both feature the work of Calvin Chu, but also because they both succeed in having a cohesive series look, but with tons of room to improvise as the series grows. They’re both graphic & eye-catching, and an extra nod to the Jill Kismet series for referencing the Dante Valentine series by the same author, but having its own identity. 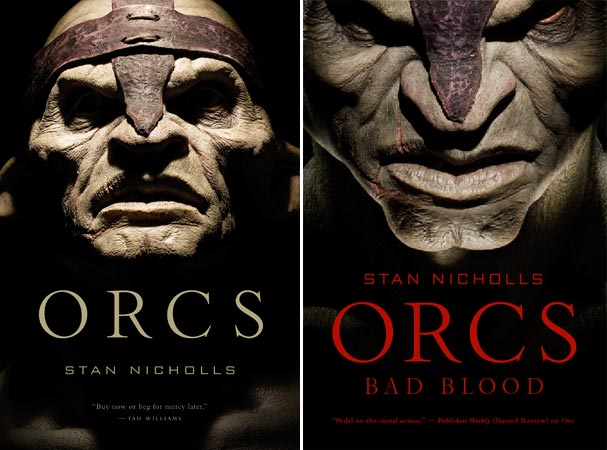 C’mon, how can you not love these covers?