I’m delighted to announce that Orbit has acquired World English Language rights in The Dagger and the Coin, a new series from Daniel Abraham. Daniel is, of course, the author of the acclaimed Long Price Quartet, which Orbit will publish in the UK at the end of January 2010, in two omnibus-style volumes. 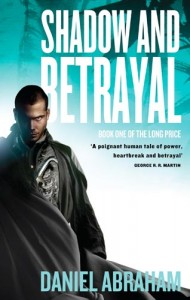 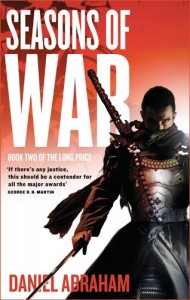 In Daniel’s own words: ‘In the way that The Long Price Quartet was a semi-tragic meditation on the epic scale of an individual life, The Dagger and the Coin is a love letter to fantasy adventure intended to keep the reader from getting enough sleep..’

‘I’m very conscious of the influences I’m cultivating going into it – Walter Tevis, Alexandre Dumas, Tolkien, J. Michael Strazinski, Joss Whedon, GRRM, Friedrich Reck-Malleczewen, Dorothy Dunnett, Tim Parks – and I’m trying to take the things that I love about each one of them and make a stew out of it. It’s set right at the friction point between the medieval period and the renaissance, so we’ve got knights and kings, but we also have merchant houses and finance. There’s some magic of the understated sort. There’s political intrigue. There’s a girl who was raised as the ward of a Medici-style bank, there’s a high nobleman who’s gotten himself and his family in over his head, there’s an emotionally scarred mercenary captain straight out of Dumas.

‘The point of it all is to make a book that reads to me now the way that the Belgariad did when I was 16. I’m going to be swimming in everything I think is cool for the next year, and I’m really looking forward to it

And for our part, Orbit is hugely excited to be publishing The Dagger and the Coin internationally. The combination of Daniel’s vision and talent and the grand canvas offered by epic fantasy promises to make The Dagger and the Coin something truly special. But don’t just take our word for it. Pulitzer Prize-winning novelist, Junot Diaz says:

‘Daniel Abraham is one of the reasons the fantasy genre continues to haunt my dreams. Abraham is fiercely talented, disturbingly human, breathtakingly original and even on his bad days kicks all sorts of literary ass. Welcome to the world of the andats, of the haunted extraordinary poets, a world where men enslave ideas, where these slaves scheme to avenge themselves, where every bad deed spawns more, a world where after the treachery, the conspiracies, the journeys, all that’s ever left in the end are the consequences. Welcome to Daniel Abraham. If you are meeting him for the first time I envy you: you are in for a remarkable journey.’

A remarkable journey, indeed. Welcome aboard!