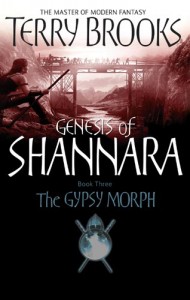 The Gypsy Morph is the third book in the new Genesis of Shannara series and pretty much wraps up the time period covered by the first trilogy.  Lots is happening.  The old world, which is ours some eighty years in the future, is ending.  The survivors of multiple catastrophes are facing a firestorm which threatens to wipe out everyone who’s left.  A small band of Men, Elves, and other species is making its way to a safehold somewhere in the Pacific NW.  Leading them is a boy called Hawk, who was the Gypsy Morph of the Word & Void series.  His little band of street kids, called Ghosts, are linked with two Knights of the Word who have allied themselves with the survivors seeking the safehold refuge.  But dangers lie in wait along the way, and an army of once-men led by demons are in pursuit.

This series is my take on how our world might destroy itself and what those who survive might do to rebuild.  It is also a direct link to the start of the Shannara series.  I plan to write somewhere around ten books to cover the thousand year period involved in this saga.  Assuming I live that long, it should satisfy those readers who have been asking ever since Sword of Shannara, “When are you going to write about the prehistory, the old world before the First Council of Druids.”  Shannara is now in its 32nd year of publication, and has some 14 or 15 books to its oeuvre.  But the books I am writing now are among my favorites, and so far readers seem to agree.

The Gypsy Morph [UK |AUZ] is available this month from all good booksellers.