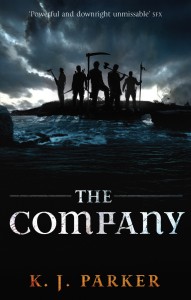 The Company started with an old friend of mine. He’s nothing like General Kunessin, but he used to have an old Air Force greatcoat with the rank and unit insignia cut off (he was a pacifist; military greatcoats are amazingly warm; we lived in a cold place)

The image of a tall man in just such a coat coming home stayed with me for thirty years. During that time, I figured he must be coming home from the war; which in turn begged the question, what war? My spasmodic studies of history during that time led me to the unavoidable truth that there’s only ever one war, and it’s never over.

All of the veterans I’ve met over the years brought the war home with them. They came back dressed in it, like a coat. Some of them put the coat neatly away in a cupboard. Some of them hid it in the attic, lagging the hot water tank. Some of them, usually the ones who didn’t do so well in peacetime, carried on wearing it because they had nothing else to wear, and they lived in a cold place.

It’s sad that war never seems to go out of style. The veterans I’ve talked to all said the same thing; it was the comradeship, the friends, that made it bearable, even joyful. Do you still see your old army buddies, I ask? None of them do. I conclude that my original mental image was deceptive; nobody comes home from the war, because everybody who fights in the war stays there, for ever and ever, and somebody else comes home, wearing their coat.

The Company [UK|US] is K.J. Parker’s first stand alone novel and is available in paperback this month from all good booksellers.