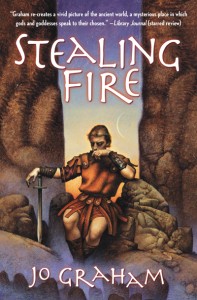 Stealing Fire is another great historical fantasy novel from Jo Graham and another beautiful painting from John Jude Palencar.

Black Ships and Hand of Isis were some of the first books I read from Orbit when I joined the team here, and they’re books I still press into people’s hands when they come to visit the office. They’re really well-written books in the vein of Mists of Avalon and I can’t give higher praise than that, people. The books are not quite a series in that you can read them in any order, and they don’t follow each other chronologically. However they are tied together by the characters and I won’t say more than that because I don’t want to give it away.

Stealing Fire is a bit different in that the first two novels had a female lead character, and this one has a hero rather than heroine. But don’t let that scare you away if you are a girly reader like me and gravitate towards the female-driven fantasy… You can absolutely relate to the story and all the characters in the book. Here’s a description:

This is the tale of Alexander’s soldier, Lydias of Miletus, who having survived the final campaigns of the king’s life now has to deal with the chaos surrounding his death.  Still mourning his Indian wife, Sati, and their infant son, who were killed in Gedrosia, Lydias throws his lot in with Ptolemy, one of Alexander’s generals who has grabbed Egypt as his personal territory.
As the generals fight and plot and murder, it seems as though Alexander’s dreams will slip away entirely.  But the gods of Egypt have other ideas, and they are through with neither Ptolemy nor Lydias.  Lydias has served them before, when another armada threatened to overrun Egypt in the distant past, and now they will aid Ptolemy in his most audacious plan — stealing Alexander’s body and bringing it to Egypt to be an eternal bulwark against invasion, and the cornerstone of the city that would exemplify his dreams.
Aided by the eunuch Bagoas, the Persian archer Artashir, and the Athenian courtesan Thais, Ptolemy and Lydias must take on all the contenders in a desperate adventure whose prize is the fate of a white city by the sea, and Alexander’s legacy.

Here is John Jude Palencar’s original painting, without all my type to muck it up: 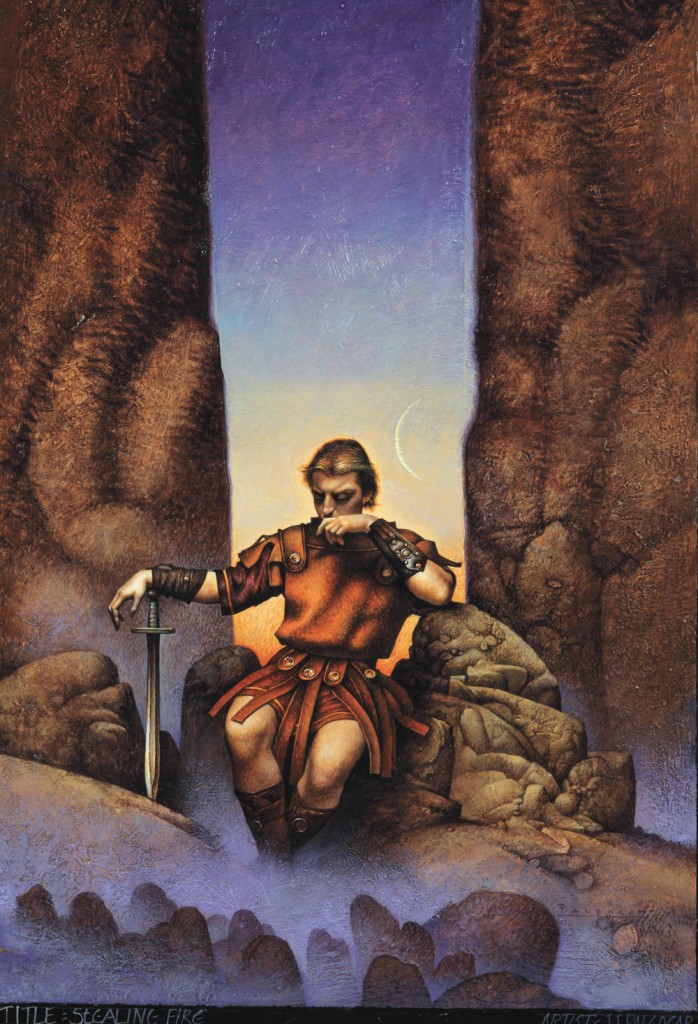