We’ve now had in the final finishing touches to some covers that have been lovingly tweaked and tended over the last few months, and here is the result: 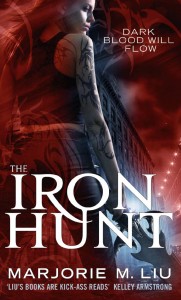 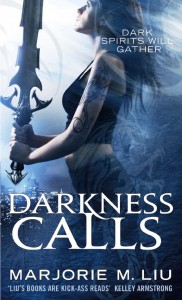 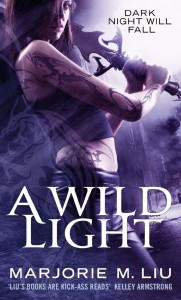 Fabulous, I think you’ll find! And the Hunter Kiss series will be released rapidly over four months, starting with The Iron Hunt in May this year. So, here is a little something on that first book:

During the day, Maxine’s tattoos are her armour and she is invincible. At night they peel from her skin to take on forms of their own, leaving her human and vulnerable – and showing themselves as demons sleeping beneath her skin. But these demons are the best friends and bodyguards a woman could have. And Maxine needs bodyguards. She is the last in a line of woman with power in their blood, trained to keep the world safe from malignant beings who would do us harm.

But ten thousand years after its creation, the prison dimension that kept the worst of these from us is failing, and all the Wardens save Maxine are dead. She must bear the burden of her bloodline and join the last wild hunt against the enemy.

And here is some praise for Marjorie M. Liu and her Hunter Kiss sequence: