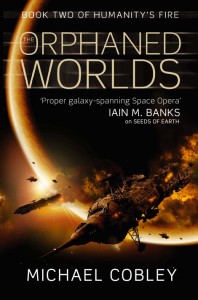 To follow on from Darren’s post, Michael Cobley has started his year with a bit of a roar. The mass market of Seeds of Earth was out yesterday. Then book two of this trilogy, The Orphaned Worlds is out in April (see the amazing cover, right) and Michael’s not slowing down any time soon …

He has a short story, Black Fragmentia, out in the latest edition of PS Publishing’s Postscripts Quarterly (PS 20/21). Then The Maker’s Mark (set in the Seeds of Earth universe) is to appear in Newcon Press’s Conflicts short story anthology, due out in February/March 2010. March will also see Michael at  Glasgow’s Aye Write festival as one of their featured authors. Amongst other things, he’ll be participating in a panel entitled ‘The Early Days of a Better Future’, along with other genre authors Ken Macleod, Richard Morgan, Hal Duncan and Debbie Miller. Then, in April, Michael will be at this year’s annual SF/F Eastercon convention where he’ll be chairing a couple of panels.

And lastly, as a treat for his fans, Michael is running a little competition to give away copies of the Seeds of Earth mass market edn. On ruminating his test question, Michael says he swung ‘between absurdly easy (how many letters are there in Greg’s surname and can you chew gum and walk at the same time?) or arcanely obscure (what is the Irish Gaelic translation of the 5th word on the 9th line on page 156?)’ but ultimately he went for something inbetween, and see here for more details. The deadline is 28th Jan … unless he changes it.

Looks like Michael has a busy Spring season ahead, and we’ll be keeping an eye on his rather stellar trajectory. Go Mike!