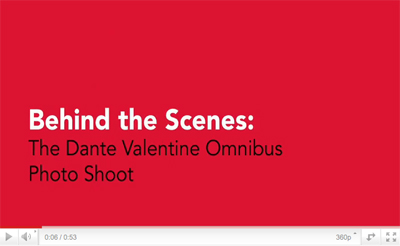 I know I skipped a week (I’ve been busy working on the Spring/Summer 2011 season), so to make up for it I give you not only a cover launch but also a fun behind-the-scenes video I made at the photo shoot for the collected edition of Lilith Saintcrow’s Dante Valentine Series.

I know a lot of you are already familiar with the five books of the Dante Valentine series, and as a fan myself, I was excited to get a chance to try a new look for Dante. The original series covers were very cool and graphic, but we felt for the relaunch with the Omnibus edition we wanted to go for a whole new look, and it would be fun to get a chance to actually personify Dante in the flesh.

I worked with photographer Michael Frost, and photo-illustrator (and propmaster) Gene Mollica to set up the shoot. Dante was played by Rachel Morgen, with hair & makeup by Nancy Sprague. Video was shot shakily by yours truly, with fancy editing by Eric Westpheling (of Blameless video fame).

The video is just a little peek behind the curtain, and more than anything else you can see how many people are involved in getting such great images. Truly the hardest working contributor was Rachel — you may think playing with a sword is all fun and games but posing is hard work…especially when being attacked by an overzealous fog machine. I’m always grateful to our Orbit models, because they’re always game for anything we throw at them—swords, attack poses, flames, fog, you name it! And even thought I love playing with the props, I’m certainly not cover model material — I cannot keep a straight face for anything —which is why I stay safely behind the scenes!

And here is the fruit of our collective labors, the cover of the Dante Valentine Omnibus, out March 2011 in a satisfyingly large trade paperback, which collects the five books of Lilith Saintcrow’s fabulous urban fantasy series. This is the perfect opportunity to enjoy the whole story at once, which is my preferred way of reading my urban fantasy. I’m such an impatient crank when I really like a book and have to wait for the next to be released. This is like instant gratification!

Here’s a little description, for those of you who haven’t met Dante yet:

Dante Valentine has been all three in her life.  But in the beginning, she was a Necromancer for hire. And while she was choosy about her jobs, there are just some you can’t turn down.  Like when the Devil shows up at the door and offers her a deal.  Her life – in exchange for the capture and elimination of a renegade demon.  It’s an offer she can’t refuse. But how do you kill something that can’t die?

Dante Valentine, one of urban fantasy’s hottest heroines, is compiled into one volume for the first time. Included in this omnibus edition are: Working for the Devil, Dead Man Rising, The Devil’s Right Hand, Saint City Sinners, and To Hell and Back.