Summer is a great time for science fiction fans to indulge their inner Eeyores. After reading Mira Grant’s latest, what could be better than stretching out under all that depressing sunshine with a classic book of the post-apocalyptic genre? 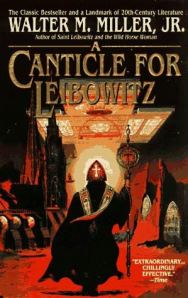 A CANTICLE FOR LEIBOWITZ covers a large swath of time as the human race attempts to put itself back together after a no-hold-barred nuclear war. It begins many hundreds of years after the game of fun with fusion was played, but the setting is still deliciously scorched and barren and humankind is poor and superstitious and still a wee bit mistrustful of science. There are ruins. There are atomic mutants hiding in desolate places. There are autocrats and barbarians. There’s a hermit cursed to live the centuries from one nuke war until what seems to be the beginning of the next. It’s what people in the film industry would call “high concept,” right? But this book is also admirable for its fine storytelling. The characters are as human as any you’re likely to meet, and easy to befriend.

The protagonists of each of the three sections of the book are associated with the Abbey of Leibowitz, which has been charged with the preservation and interpretation of knowledge from ancient pre-war times—the wondrous times in which we now live. Much of the book explores the primary objective of people living in times “simplified” by lack of technology—to get the lights back on. Watch the determined people grope in their lairs as they attempt to master technology. It’s like watching a baby attempt to stand for the first time. The deep hope and yearning and pride of that. Laugh with them and root for them and also lean forward from time to time, to warn them.

But this is no abstract theory-mining of what humankind might become. The humanity of this book can inspire fierce loyalty among its readers. Are there assumptions in it that might fall flat in this new millennium? The book was first published in 1959; much has changed, but one thing hasn’t: the nuclear fire hasn’t yet rained down on us. The story is set primarily in a Judeo-Christian world, which might offend those with different beliefs. And those looking for an exploration of gender roles after The Big Ka-Blooey will note that most of the characters in CANTICLE are celibate monks. (For a woman’s take on the post-apoc world, try M.K. Wren’s A GIFT UPON THE SHORE.) But as with all books, it’s important to take into account the time in which CANTICLE was written. And who can deny that the nuclear threat is still relevant, or that the survivors of such a holocaust would be inclined to embrace spiritual belief and codified structures of power?

Written by Walter M. Miller Jr., a former World War Two bomber crewman, sci-fi short story master, and Hugo award winner, A CANTICLE FOR LEIBOWITZ is told with empathy, humor, and a melancholy that can bring a throb to one’s sunwarmed bones. It’s a pure, Eeyore-ian pleasure to stand with the idiosyncratic members and guests of the Abbey of Leibowitz as they play their roles to the end. Reading CANTICLE this summer 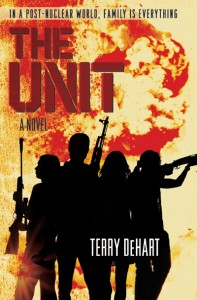 would be a fine way to put current hardships into perspective, and to engage in the time-honored science fiction pursuit of exploring what it means to be human.

(This is Terry DeHart’s first post on post-apocalyptic tales; his direct contribution to the literature itself, his debut novel THE UNIT has been called by Publishers Weekly “a striking picture of human vulnerability and strength.”)