Tweet it from the rooftops, a new Culture novel by Iain M. Banks will be released in October.

The title is SURFACE DETAIL, which refers to a number of things, not least one of the principal characters, who is covered, externally and internally, with congenitally administered tattoos. 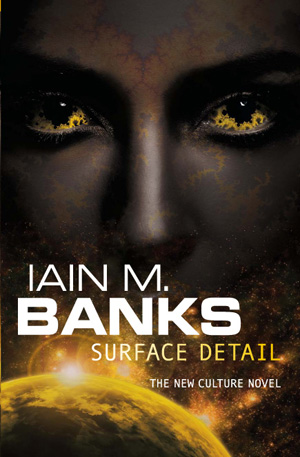 It begins in the realm of the Real, where matter still matters.

It begins with a murder.

And it will not end until the Culture has gone to war with death itself.

Lededje Y’breq is one of the Intagliated, her marked body bearing witness to a family shame, her life belonging to a man whose lust for power is without limit. Prepared to
risk everything for her freedom, her release, when it comes, is at a price, and to put things right she will need the help of the Culture.

Benevolent, enlightened and almost infinitely resourceful though it may be, the Culture can only do so much for any individual. With the assistance of one of its most powerful – and arguably deranged – warships, Lededje finds herself heading into a combat zone not even sure which side the Culture is really on. A war – brutal, far-reaching – is already raging within the digital realms that store the souls of the dead, and it’s about
to erupt into reality.

It started in the realm of the Real and that is where it will end. It will touch countless lives and affect entire civilizations, but at the centre of it all is a young woman whose need for revenge masks another motive altogether.

Orbit will be publishing SURFACE DETAIL worldwide in print and e-book editions this October.