Those of you who read my pre-Worldcon post on Marianne de Pierre’s blog, will know that even getting there was a big deal for me. Although a long time avid reader of scifi-fantasy (SFF) and lover of shows such as Babylon 5, Buffy and Firefly, I am still something of a moss gatherer by nature and not unhappy with the quiet life of study and garden, manuscripts and books . . .  But the opportunity to attend the 68th Worldcon, or Aussiecon4, in Melbourne seemed just too good to miss—and I am so glad that I did go!

Firstly, it was fabulous to get together with so many other people who love SFF as much as I do. My very first panel was “Eowyn and Sam, Underappreciated Heroes in The Lord of the Rings” and of course, the hall was full (I mean: LoTR!), with both audience and panelists all enthusiasts for the topic. I know I had a great time, because I was pretty much in Fantasy heartland territory, but I got the feeling everyone else was enjoying themselves as much as I was. And when all’s said and done, it’s a pretty easy topic to roll with. 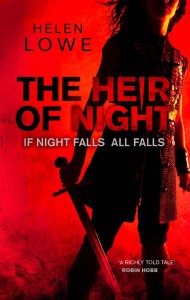 In terms of highlights, there were so many that it’s hard to enumerate. Seeing The Heir of Night in print for the very first time was definitely right up there. So was meeting so many other writers and seeing even more across the crowded concourse. Writers were just—everywhere! Meeting folk from both my US and UK publishers for the very first time was a blast, as was being approached by people who had either read my first novel, Thornspell, or loved what I had to say on a panel. Even more of a blast was when I was approached by fellow Con goers clutching both my books because they had liked what I’d had to say on a panel. Heady stuff for a moss gatherer from the bottom of the world!

Overall though, my highlight of highlights was the Hugo Awards ceremony. I mean, go figure: I am both an avid reader and a writer, plus I had read and voted on all the fiction finalists, so “being there” for the actual award ceremony was a really big deal. Even better—because Orbit sponsored the pre-Hugo party—I was able to meet and chat with many of the nominees in person. They were being very cool, but you could feel the excitement building, and that was all part of the atmosphere. The ceremony itself was very polished and there were many great moments—Seanan Maguire’s (aka Mira Grant’s) sheer delight at winning the John W Campbell Award for Best New Writer;  Peter Watts telling us that winning the Hugo for Best Novelette (for The Island) had transformed the worst year of his life into the “best summer ever”;  and Charles Stross, who was so certain that he was not going to win the novella category (for Palimpsest), that he had omitted to prepare an acceptance speech. And perhaps the most surprising, but also exciting, moment of all—realising that the Hugo for Best Novel was being awarded jointly for only the fourth time: to Paolo Bacigalupi for The Windup Girl and China Miéville for The City & The City. (Both great reads, by the way, in my humble opinion.)

It wasn’t until I got on the plane to return to NZ that I realised that there was one other really great aspect of attending Worldcon that was very personal for me, one that tied into but was not restricted to some of the other highlights above. I have been writing away in a small study in New Zealand for quite a few years now, while most of my writing career has been happening on the far side of the world:  finding an agent, selling my manuscripts, the whole process of publishing my first—and now my second—novel. Intellectually, I knew it was real. But until I went to Melbourne and met publishers and booksellers, writers and most importantly readers and fans from all over the world, it didn’t feel real. Now it does.

Helen Lowe is an award-winning novelist, poet and interviewer. Her first novel, Thornspell, (Knopf, 2008) won the 2009 Sir Julius Vogel Award for “Best Novel, Young Adult”, and Helen was awarded the Sir Julius Vogel for “Best New Talent” in the same year. Her second novel, The Heir of Night, the first of the adult WALL OF NIGHT quartet, is being published on 1 October in the USA, Australia/New Zealand, with UK publication scheduled for March 2011. Helen also blogs on the first of every month on the Supernatural Underground and every day on her own Helen Lowe on Anything, Really blog.