A long time ago, when the Moorehawke Trilogy (UK | US | Fr) was still just a book-foetus in my fuddled noodle (I was working on something else at the time) I began playing with the idea of the Loups-Garous.

When the story first took shape in my head, the Loups-Garous were just humans. Members of a well structured organisation of men who travelled out from central bases of operation (compounds in the Russias, the Moroccos and Europes) and made a rich living from banditry, mercenary activities and (of course) the trading in slaves. I had wanted them to embody a callous disregard for the welfare of others, and a lack of respect or loyalty to anything other than their own kind. Originally they simply adopted the name Loups-Garous as a tribal title, and used the legend of the werewolf as a guise in order to terrorise the isolated villages and communities from whom they kidnapped their supply of slaves. But I couldn’t resist pushing it further, and eventually they became Wolves – their greed and cruelty now taking on a physical aspect as well as a behavioural one.

So now Loups-Garous was a tribal name for an affiliation of Wolves, and the Wolf nature became the unifying trait for what was a mixed band of diverse races and ethnicities.  In Moorehawke, if a man is born a Wolf he may well find himself ostracised from all other societies, but if he is strong enough and ruthless enough he will find acceptance by and be allowed live as one of the Loups-Garous. (Wolf women are not even that fortunate.) For someone who has been marginalised because of their physical birth-right this would be a very tempting life choice.

The Wolf nature also became the motivation behind the Sevenths. In order to breed more Wolves, the Loups-Garous developed this method of invading a village, knocking up as many women as possible, and then returning seven years later for their own offspring. Any children who were Wolf would be kept and raised within the highly structured brutality of the Loups-Garous community; any who were human would be sold with the rest of the slaves.

The more I played with it, the more I grew to love this new version of my original Loups-Garous. As Wolves the Loups-Garous allowed me to play with all the same heavy themes as before, but now they didn’t feel so heavy. Fantasy does that for writer. You can explore so much in such an exciting way that it doesn’t feel like you’re writing about issues at all. Hurrah for fantasy. 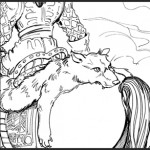 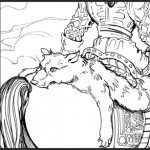 But I had painted myself into an ethical corner. You see, if there’s one thing guaranteed to get my hackles raised it is the concept of innate evil. You read it all the time in fantasy and YA literature – especially in YA – and it drives me mad.

I cannot stand this appalling idea that someone is evil because they are born that way: this concept that one’s name can be drawn from some genetic hat and there you are, irrevocably on the ‘bad boys’ side of the class room makes me see red. There was no way I was going to indulge in that particular mythology.

I had always planned there to be this dichotomy between Christopher and the Loups-Garous. They mirrored and contrasted each other in so many ways. So I once again pushed one step further, and in my mind Christopher became a Wolf: a boy raised by folks who accepted his nature, and who worked with it, allowing him develop the positive aspects of it (the speed, the endurance, the strength, the loyalty, the joy-de-vivre, the musicality) and control the more harmful aspects of it (the quick temper, the violent mood swings, the excess of energy, the hunger (which the Loups-Garous turn to greed) Christopher became the perfect counter-balance to the Loups-Garous,  who a a group had been raised to develop the less positive aspects of the same physical birthright.

By throwing these two disparate aspects of the same coin into the Moorehawke mix, I was still able to deal with all the themes I wanted to between Christopher and the Loups-Garous (themes of deferred revenge, physical and moral restraint, self sacrifice etc. etc.) but they were so much more fun to write now that they also had this physical and mythological aspect  to them.

When it came time to start actually writing Moorehawke, I really wasn’t sure if it was ready. I thought to myself, I’ll give this strange wee book two or three pages, if it isn’t working for me I’ll put it back in its box and move on to something else for a while. Less than 18 months later I had the Moorehawke trilogy written – all 410 thousand words of it! It just poured out as one (very long) book told in three volumes. I was a physical mess at the end of it. LOL. But it was worth it. If I’m honest, it’s one of my favouritest babies and the Loups-Garous are one of my best beloved creations (but shhhhh – don’t tell the others).