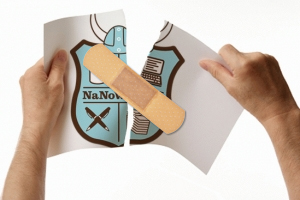 It’s November, which means thousands of aspiring writers are telling their friends and family to go amuse themselves for a while. They’ve got a novel to write.

But, it’s been a bit of a rocky start for the NaNoWriMo crowd. For the uninitiated, National Novel Writing Month is that special time of year where anyone who likes makes a run at writing 50,000 words in 30 days. That’s like, 1700 words a day. Which is like, 3-4 pages. Every day. It’s a monumental task, especially when you consider that most of these people aren’t professional writers and mostly have day jobs, families, social obligations… It’s one thing for the pros who participate (who all seem to finish early) but your average aspiring writer is missing that most precious commodity… time.

Which is why Laura Miller’s post on Salon is so… puzzling. She basically goes after NaNoWriMo with both barrels– I’ll get to specifics of her argument in a moment. In addition to her high-profile attack, I get the sense that there’s a bit of push back in the air this year. Galleycat this morning went after first time fantasy novelists with a funny post about what not to do. It’s hard to argue with a lot of the points, but something about the principle just seemed off to me.

Basically, for me, it comes down to this. NaNoWriMo isn’t for professionals. It isn’t for people who are particularly concerned with writing the next Great American Novel or, hell, the next James Patterson. It’s for people who have a dream and, in their busy everyday lives, need a kick in the pants to get going.

For starters, the whole thing is a misnomer– 50,000 words does not a novel make. (An aside: I’m mostly limiting my comments to fantasy and science fiction, a) because that’s what I know best and b) it seems like a disproportionate number of NaNoWriMo-ers– is there a better term for that?– are SFF focused). In general, your epic fantasy novels clock in at 120,000 words plus and it’s not uncommon to receive manuscripts that clear 170,000 words. That’s 2-3 times the length of NaNoWriMo.

Also, a novel isn’t just an amalgamation of a certain number of words. It takes time and effort and refinement to get to a publishable state. A month where you’re writing nearly 2,000 words a day, just doesn’t afford time for revisions, rereading, or careful attention to detail.

But, frankly, that’s not what it’s about. Miller is right about one thing: “it’s clear that NaNoWriMo winners frequently ignore official advice about the importance of revision; editors and agents are already flinching in anticipation of the slapdash manuscripts they’ll shortly receive.” It’s true that there is an uptick in unsuitable submissions in the months following NaNoWriMo because participants aren’t writing novels, they’re writing drafts of novels– they may one day go on to be great books, but they won’t be on December 1st. But, to flip one of Miller’s later points on its head, I’m confident that without NaNoWriMo there will still be plenty of poorly conceived, under-edited and unsuitable submissions arriving on my desk.

She goes on to point out that “NaNoWriMo is an event geared entirely toward writers, which means it’s largely unnecessary.” Meaning, I take it, that real writers are driven by some deep-seated muse that endlessly pours beautiful language and brilliant plots into their brains, unasked for and that they are consumed by an all-consuming need to commune with their personal genius. From working with authors day in and day out, I can say that this is a steaming pile of unmitigated… (hmm, wait a sec, this is the official Orbit blog. Sigh. Self-censorship is a drag.) Writing is hard. It requires dedication and willpower and perseverance to accomplish something as difficult as a third novel or a tenth novel. For most, a first novel seems insurmountable and you meet more authors than not whose “first novel” is really the third one they put to paper.

Sure some people just can’t seem to help themselves. I once got a call from an agent who informed me that an author wrote an entire novel in the month of December and then delivered his contracted book three months early. Others compulsively outline new projects by the day. But that’s not the norm, even among published, successful authors.

Writers are made, not born sui generis. And only the aspiring writer can make that happen– mostly by parking themselves in front of a laptop or notebook or cocktail napkin and putting words to a page.

So, even Galleycat’s “tips,” (and, to be honest, I can’t argue much with the individual items on that list except to say I’ve seen almost every single one of them done and done well)* are kind of contrary to the spirit of the event.

The publishing world is a tough one and people often forget that getting your book out there is often the first step on a long road. But before even that, there’s that moment that every writer has to look at and consider how best to turn a dream into a reality. NaNoWriMo isn’t about writing good books. It’s not even about writing a book. It’s about becoming a writer– a process that Laura Miller apparently considers irrelevant and beneath her.

There’s a time for criticism– it’s often a long and brutal process both before and after publication, but NaNoWriMo isn’t it. Taking them to task is like walking into a pre-school and berating children for not having solved special relativity yet. It’s pointless and petty and just confusing.

The honest truth is that most novels started under NaNoWriMo will never be published. But, some of these newly minted writers will go on to have brilliant careers. While Laura Miller might feel that there’s “no shortage of good novels,” I take the long view and would like to think that when I am old and even more crotchety than I already am, there will still be good novels because we encouraged the next generation of writers to make their dreams a reality.

That said, this is about future books. Don’t send me anything that was written for this year’s NaNoWriMo until next year’s is over. At the earliest.

* This, however, was new to me and fascinating.