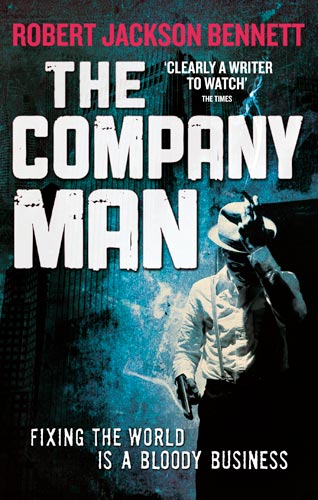 From the acclaimed author of Mr. Shivers comes a gripping tale of murder and intrigue set in an America that never was. The Company Man, Robert Jackson Bennett’s second novel, takes place in an alternate early twentieth century America. Part steampunk, part murder mystery, part horror, Robert’s writing is truly unique and original. The Guardian recently had this to say about The Company Man:

“Bennett combines horror, science fiction and alternative history in a slow-burning novel which is both a superb character study of an alienated individual and a critique of heartless capitalism”

The Company Man is out now. I am also very pleased to announce that we have acquired a fourth novel from Robert Jackson Bennett to follow The Troupe, out next year. The untitled novel continues Robert’s exploration of the dark, fantastical face of Americana as one woman, an ex-police officer, uncovers her secret history in a New Mexico town that time seems to have left behind. Trapped in the nuclear age optimism of the 1960s, the residents of Wink, NM are concealing dark secrets and surreal horrors behind their pleasant facade.

Robert Bennett’s first novel Mr. Shivers was widely acclaimed:
“… like a collaboration between Stephen King and John Steinbeck.”
— Publisher’s Weekly
“Readers who liked Neil Gaiman’s American Gods will find similar themes here, while the setting and bleak inevitability invoke a more readable Cormac McCarthy.”
— Library Journal (starred review)
“Imaginative and beautifully written, Mr. Shivers is a powerful book that reads as though presented by an author at the peak of his abilities.”
— Charles de Lint
‘…a startling debut, a deft amalgam of thriller, cerebral horror and American gothic’
— Guardian (UK)
‘A ravishing debut . . . Supremely chilling, it never loses its grip in its journey to the edge of the apocalypse’
— Daily Mail (UK)
‘This is one hell of a debut novel, possibly the best first book by an author that I’ve ever read’
— Impact (UK)

Read an interview with the author about The Company Man here! Or follow him on Twitter at @robertjbennett!