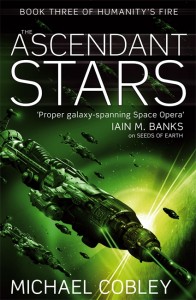 Iain M. Banks is someone who knows a thing or two about science fiction, so when he labelled Michael Cobley’s SEEDS OF EARTH (UK | ANZ) as ‘Proper galaxy-spanning space opera’, you just knew something special had begun. Two years on, tens of thousands of fans have been enthralled by Cobley’s war-torn universe where the human race battles ancient alien civilisations just for the right to survive, an epic tale continued in THE ORPHANED WORLDS (UK | ANZ).

Now, in THE ASCENDANT STARS (UK | ANZ) – the explosive final book in the Humanity’s Fire trilogy – the fate of the human race will be decided. Ancient forces are awakening. Battle fleets are converging. Sentients and machines will lock horns in a devastating battle where there are only two outcomes: survival or the sterile dusts of space.

Praise for the Humanity’s Fire trilogy:

‘A great hunky juggernaut of a Space Opera novel . . . that should be greeted with enthusiasm by fans of Peter F. Hamilton and Iain M. Banks’ – SFFWORLD

‘A really good, enjoyable and compelling book, written with verve and more than a little humour’ – BOOKGEEKS

‘There is a lot of depth to be found in Michael Cobley’s richly imagined universe, the characters beg deeper exploration, and the series as a whole possesses tremendous potential . . . Highly recommended’ – FANTASY BOOK CRITIC

‘This is really a fine piece of work and could, when it’s all finished, be up there with the aforementioned Tolkien or Asimov’s ‘Foundation’ series as one of the all-time greats’ – SF CROWSNEST

‘Another author that is being added to my buy-on-release list and one that is a breath of fresh air into the genre with an intriguing, complicated and a well executed story. Highly recommended’ – WALKER OF WORLDS

Michael Cobley can be found online at www.michaelcobley.com. A video Q&A with Michael about the Humanity’s Fire series can be found here.