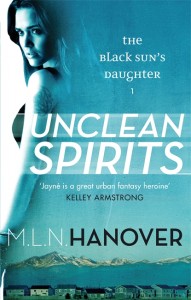 UNCLEAN SPIRITS (UK | ANZ) is out (at last!) in the UK and our international markets this month. It’s the first novel in the Black Sun’s Daughter series by M. L. N. Hanover and we think you’re going to love it: a pacy, action-packed urban fantasy featuring Jayné Heller, a heroine who is strong and sassy, yet who often doubts her ability to tackle the burden that life has given her. As Kelley Armstrong so rightly says, she’s great!

Jayné Heller has always lacked a clear direction in life. She’s just dropped out of college and she really doesn’t get on with her family. So when her uncle Eric dies and leaves all his worldly possessions to her (which just so happens to include properties all over the globe, along with a considerable amount of cash) it seems that she has the chance to start her life afresh.

Except that this new-found wealth comes with a sinister price. It turns out that her uncle spent most of his life fighting a secret battle against ‘riders’ – evil spirits that take over human bodies and then control them. And it seems to be Jayné’s responsiblity to carry on this war from where her uncle left off . . .

UNCLEAN SPIRITS is available now and we’ll be continuing the series over the next few months: DARKER ANGELS comes out in February, VICIOUS GRACE in March and KILLING RITES in April.

‘A strong beginning to an intriguing Urban Fantasy series, Unclean Spirits introduces readers to a fascinating new supernatural world. M. L. N. Hanover’s debut novel in the genre teems with promise, and I am excited to see where the next book leads’ – Book Smugglers

Between the novel’s energetic pacing, Jayné’s undeniable charm, and the intriguing concept behind the riders, Unclean Spirits is a solid entry in the urban fantasy genre’ – Fantasy Book Critic

‘Hanover’s treatment of the subject matter makes it a very entertaining book where the pages turn all too easily. I’ll be back for more and I reckon I’ll see you there with me’ – Graeme’s Fantasy Book Review