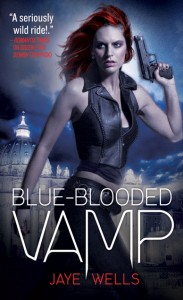 In just a few short weeks BLUE-BLOODED VAMP (US | UK | AUS), the fifth and final volume of the Sabina Kane series, will be released!

Sabina and friends set off for Italy hunting for the means to defeat Cain, the father of all vampires and the man who murdered her family. Revenge may finally be within reach unless Cain finds her first. It all comes to a head in this dramatic series conclusion.

Check out this excerpt from BLUE-BLOODED VAMP or start the series from the beginning with RED-HEADED STEPCHILD (US | UK | AUS).

The St. Charles streetcar lumbered its way toward the Garden District like a mourner in a funeral procession. The rocking motion should have soothed me, but I was pretty sure I was beyond ever relaxing again.

Adam sat next me. His warm hand on my leg helped dispel some of the chill. He wore his trademark brown duster and heavy boots. The goatee and muscled frame added to his general air of menace, but the mage’s real danger lay in his ability to wield magical weapons.

In addition to being my partner, he was also my . . . boyfriend? No, too high school. Lover? Ugh. Consort? Meh.

I guess when it came down to it, he was just my mancy, plain and simple. And his presence had become as critical to my equilibrium as gravity or blood.