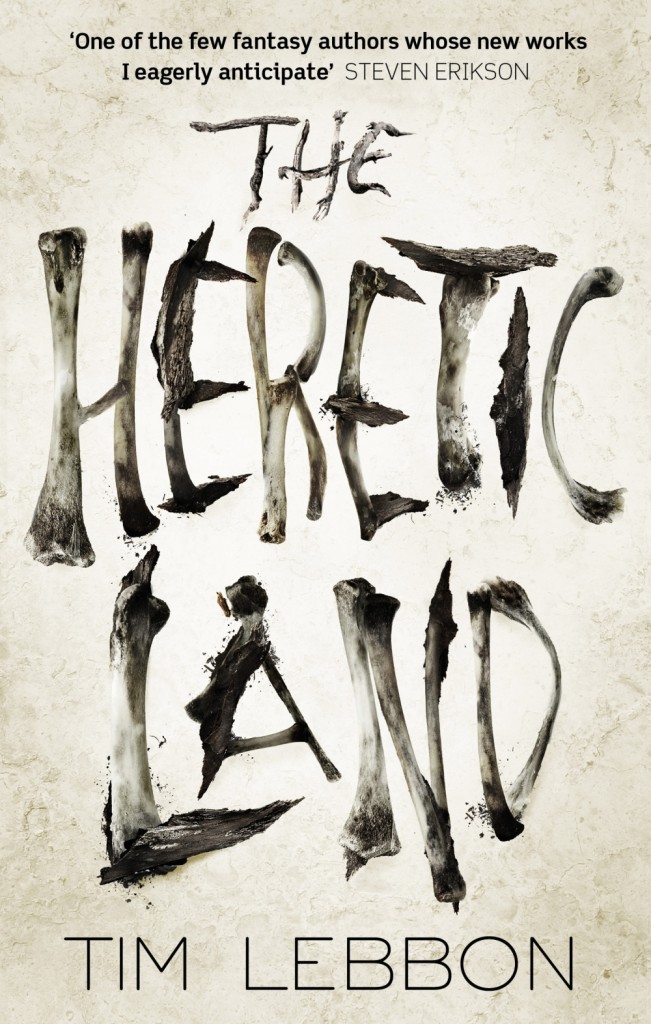 Quite a few reviews of ECHO CITY and my new Orbit novel THE HERETIC LAND refer to my ‘horror writing credentials’, and it’s true that I’ve written lots of horror novels (and novellas, and short stories) in my time, and I still do!

So even though these two novels are definitely built upon a fantasy base – with other-worldly settings, new landscapes, flora, fauna, societies, species of human, religions, and politics – I thought for this gust blog post it might be interesting to examine a few instances in THE HERETIC LAND where my fantasy edges into horror. Or horror edges into my fantasy. You know what I mean . . .

Unlike ECHO CITY, in this new novel the action ranges over large distances. ECHO CITY was quite a claustrophobic novel, especially as much of the action took place below ground. It was set in a large city, and not much happened beyond the city walls (I say not much, because there was some action out beyond the boundaries of what most characters believed to be the extremes of their environment . . . but I won’t spill the beans in case you haven’t read it yet). Perhaps partly because of this, THE HERETIC LAND takes place on two island continents. And one of these places isn’t in a very good shape at all.

The action starts centuries after a terrible war left the island of Skythe a ruin, its people dead or diseased, the land infected with the fall-out of forbidden magic . . . and the whole place slowly, gradually dying. A pretty horrible place really, and something similar could be found in many post-apocalyptic horror novels (in fact several of my fantasy novels, ECHO CITY included, have been called post-apocalyptic novels set in a fantasy land . . . and I’ll not argue with that).

And as well as this there’s the polluted, magic-tainted sea between the two lands of Skythe and Alderia. And here be . . .

I like monsters. A lot. I’ve written a little about monsters we all recognise – vampires (occasionally), and the huge SF zombie thriller COLDBROOK is due out soon – but what I love most is making up my own monsters. In THE HERETIC LAND, perhaps my favourite are the Deep Pirates of the Forsaken Sea. These grotesque things – part human, perhaps? – live for unknown lengths of time, use sea creatures as mounts, and love the taste of human flesh. And here it is:

The pirate had human qualities merged with the worst aspects of the sea. Bare, thick torso spotted with shellfish, a large head with shockingly human features, long flowing hair which was said to consist of poisonous fronds, long limbs that ended in claws ten times larger than the most monstrous crab’s, and thick legs that parted into powerful tentacles, each of them suckered and spiked. Its scale made it even more awful – ten times the size of a human, it was a blight on reality.

The decapus beneath it was a vivid red, its tentacles longer and more deadly, its beak clacking, and its huge eyes reflecting sunlight with an alien regard.

Euch. You’ll get to meet the Deep Pirates in THE HERETIC LAND. Close up.

A more abstract horror, perhaps, but one that I write about a lot, and which many people will recognise. At least two of my main characters feel alone even with people around them. It’s the way history has treated them, the way fate had taken them, and it affects their actions greatly. For good and bad. Loneliness isn’t something I experience myself – I have a loving family and many great friends, and when I am alone to write, or running in the hills, I love my own company.

And I guess that’s where the greatest fears come from . . . the threat of losing something wonderful.

Those same two characters I mention above are also possessed. Different things possess them, but it leads to the same result. Loss of identity. A twisting of natural laws. They’re my two favourite characters from the novel, and perhaps the two most wretched as well. Even when one of them is doing terrible things, I feel sorry for them.

Loss of control is I think one of the fundamental horrors, because control is linked inextricably to personality. Lose one, you lose the other. And good or bad, knowing ourselves is vital to being able to weather life’s storms.

And here we are, back with the walking dead. Or are they dead? Even I’m not sure.

The Slayers are one of the more horrific creations in THE HERETIC LAND. Pitiless, determined, they’re like The Terminator . . . once set on their course of murder they won’t stop until their job is done. They’ll chase, pursue, forever. That’s pretty damn scary really, don’t you think? You can’t stop them, they’re incredibly hard to kill, and they have you in their sights. Soldiers? Mercenaries? What drives them? Do they take orders or act on their own?

The Slayers are monsters. Even I’m not sure of everything about them, and I think that’s allowable. I created them, after all. Make up your own mind.

And talking about the dead walking, the whole story of THE HERETIC LAND revolves around . . .

This is much more of a fantasy idea, I guess. Yet the nature of the god’s return and how it achieves resurrection is pretty horrific, both physically, and how it affects those around it.

Fallen gods returning is a fascinating idea for me, because I love exploring the nature of belief in my fiction. In this novel I wanted to explore what might happen when a god manifests as something physical – something you can touch, see, speak to. Would it still be a god? Could it?

That’s something for my characters, and hopefully you the readers, to decide.

I hope you enjoy the fantastically horrible, horribly fantastic THE HERETIC LAND.