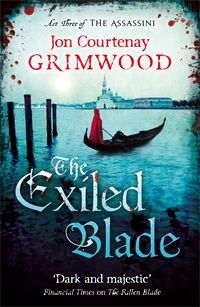 Fans of Jon Courtenay Grimwood’s Assassini trilogy can’t have failed to notice the numerous quotes from Shakespeare that preface each act. With the release of THE EXILED BLADE [UK | US | ANZ] – the final novel in this wonderfully dark historical fantasy – we thought it was the perfect opportunity to ask Jon to explain this Shakespearan link.

The quotations at the start of novels exist to…

Do what exactly? Provide a fig leaf of respectability? Prove the writer’s heard of Camus or Kierkegaard? Flatter the reader that this is a worthwhile book? I think (I hope), that if used properly they exist like clues in a noir and raise a wry smile from the reader when she puts down the books, and thinks, ‘Ahh. So that’s how it fitted…’ In the course of Tycho’s story I used the following quotes in the following order. There are two per book, for parts one and two. All from Shakespeare and all (but the first) from the plays referenced* in the story…

‘…What a hell of witchcraft lies

In the small orb of one particular tear…’

‘May the winds blow till they have waken’d death!’

‘Now could I drink hot blood, and do such bitter business, as the day would quake to look on it…’

‘There is special providence in the fall of a sparrow. If it be now ’tis not to come , if it be not to come, it will be now…’

‘This thing of darkness I acknowledge mine…’

Individually they echo what is about to happen in that section, Together they mirror the story arc within The Fallen Blade, The Outcast Blade and The Exiled Blade, as Tycho learns what it means to be human, and those around him discover what it’s like to let a dazzling darkness into their midst. His is a story of redemption, because everything I writes is, in some sense, a story of redemption. It’s also a story about responsibility, and prices we pay to become or remain human.

Shakespeare stole Othello’s story from Giovanni Cinthio, just as he stole Hamlet from Saxo Grammaticus, and Romeo and Juliet from Arthur Brooke or William Painter, who both used it before him. He also happily pillaged much of Boccaccio’s back catalogue. So I have no regret in stealing in my turn. In The Fallen Blade and The Outcast Blade, Lord Atilo is Othello, the Moor of Venice, and Desdaio is the ill-fated Desdemona. And while I agree with the occasional reviewer who felt Desdaio got a raw deal . . . Precedent rather fixed her fate.

Lady Giulietta, who spans all three books, is obviously Juliet from Romeo and . . . While Tycho, mistaken for a Romaioi (Byzantine) noble is her star-crossed lover. Duchess Alexa combines elements of The Tempest’s Prospero; the island (Venice) is hers and A’rial (Arial) is her pet witch. She’s also Queen Gertrude from Hamlet, with steelier nerves and a straighter spine; which casts Prince Alonzo as Hamlet’s step father, and means poor mad Duke Marco is Hamlet himself.

The three tragedies are divided over the three novels; with Romeo and Juliet being the big arc; and Othello and Hamlet being smaller spans sitting inside and swapping half way through the second book. At some point, I hope, the three will be bound as one (as happened with the Arabesks), and the whole arc with its progression from dark into light will be clear. Although stealing from the master has a certain joy. The less joyful part is that his characters fates are predetermined (pace poor Desdaio). And though a writer can afford to play fast and loose with the occasional outcome it has to be occasional.

Obviously enough, the Assassini novels form a love story in which half the characters are insane and their love is unwise (which sounds like life to me). The emotional template is the tragedies and the sensibility broodingly Jacobean – at least I hope so! But I’ve allowed myself and the characters hope. As Prospero says at the end of the Tempest, ‘The rarer action is in virtue than in vengeance.’

Tycho is allowed a choice.