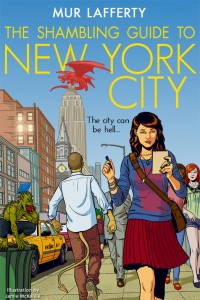 This is a big week for us in the New York office. Book Expo America begins this Thursday. For three full days of signings, panels, and events, New York City will host authors, agents, and book lovers from all over.  So it is appropriate that this week marks the publication of Mur Lafferty’s debut novel, THE SHAMBLING GUIDE TO NEW YORK CITY (US | UK | AUS) in trade paperback, ebook, and audio formats.

THE SHAMBLING GUIDE TO NEW YORK CITY follows the adventures of Zoe, a recent New York transplant, as she struggles to settle into her new job in Publishing and life in the big city. Sounds pretty normal right? However, if there is one thing that I’ve learned over the last five years, nothing is ever completely normal when it comes to New York City. As it turns out, humans aren’t the only ones to call New York home.

For the release of novel, we wanted to show you a bit of Zoe’s New York which is as mysterious and wonderful as the real thing. Click here to view a map of some of the hidden places of New York City where we fragile humans dare not go. For those of you who are attending BEA this week, be sure to stop by booth #1828 to pick up a printed copy to take home with you. 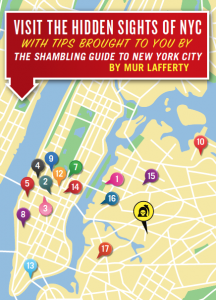 We’re absolutely thrilled by the reviews that this debut novel has already received, and hope you will enjoy it as much early readers have. If you want to sample the novel for yourself, click here or go to Mur Lafferty’s site and listen to an audio sample. The first four chapters are online now, but you can purchase the entire audiobook from Hachette Audio today.

Praise for THE SHAMBLING GUIDE TO NEW YORK CITY

“… it never pauses for breath — there’s love, war, humor and a lot of heart, and by the time it’s done, you know exactly why so many writers have been buzzing about Mur Lafferty for so many years. It’s as strong a debut as I can remember reading, and I can’t wait for the follow-on volumes.” – Cory Doctorow via Boing Boing

“The hip, knowing and sometimes hysterically funny narrative, interspersed with excerpts from the guide of the title, lurches along in splendid fashion. Combine wit, style and acute observation: The result is irresistible.” – Kirkus (starred review)

“Lafferty, a 2012 nominee for the John W. Campbell Award for best new writer, introduces a spirited, indomitable heroine who is bound to be a favorite of urban fantasy devotees.” –Library Journal (starred review)

“This debut is a refreshing departure from the dark and sexy face of so much urban fantasy. Creative and funny, it explores a world where monsters (“coterie”) live amid humans. A sarcastic protagonist, well thought-out details and an authentic picture of New York City further bring the tale to life.” – RT Reviews (Top Pick)