To celebrate paperback release of the final book in the Traitor Spy trilogy, THE TRAITOR QUEEN (UK | US | AUS ), we asked fans of the Trudi Canavan Facebook page what questions they’d ask Trudi about her writing if given the chance. There was a fantastic selection, which were then voted down to a final four for Trudi Canavan to answer. Find out about who Trudi would cast in the Black Magician trilogy films, and more about her new series, the Millennium’s Rule trilogy.

Q. If the Black Magician trilogy were made into a film, who would you like to portray the main characters?

A. My original casting wish list betrays my age! I wanted Natalie Portman as Sonea and Daniel Day Lewis as Akkarin, and Matthew Broderick as Cery. But those choices were just the first building blocks and my visual picture of the characters changed as I wrote the Black Magician Trilogy. You see, in developing the world my approach was to try to make the ecology and cultures seem less like this world’s past transplanted onto another, but a truly new world. My rule was ‘inspired by not based on’. I applied that rule to the people as well, who aren’t based on any particular race or culture of this world but have small similarities to some. I realised later that the small similarities were inspired mainly by the wonderful mix of people in Australia, created by our proximity to Asia and Polynesia, and the waves of immigration over the last century.

I’ve put together a Pinterest page called Casting Wishlist, but since film and TV isn’t based in multicultural Australia, I found it hard to find actors to play all of the characters – and even Bollywood hasn’t made finding someone to play Faren easy.

Q. I simply loved your books. ALL of them. Especially the ones in the Black Magician universe. Will we ever see any adventures set in these lands again?

A. Maybe. When I finished the Black Magician trilogy I didn’t think I’d write a sequel as I didn’t have enough ideas. But as I wrote the Age of the Five the few ideas I had began to develop and attract others, so by the time that trilogy was done I was ready to write not just a sequel, but a prequel as well. Once again, I don’t have enough ideas for more books, but I’m hoping the ones I have will mature into something worth writing while I’m writing the Millennium’s Rule trilogy. All I can say is, I like the idea of jumping another twenty years forward and putting Lorkin in the position of the worried parent, introducing new technology and forcing more class-leveling challenges on the Guild.

Q.  Which character’s personality and history came to you the fastest? Do you ever struggle with personality, back-story and relationships in your writing?

A. I don’t know which character developed the fastest. Some seem to spring into existence instantly, some take a while to form. What is most important at the start, I think, is for there to be potential for change. Even a character thousands of years old must face change, even if it is degeneration instead of growth. I don’t struggle with personality, back-story or relationships, but I find I do the most tweaking on the first five or six chapters a new character appears in, because in the first draft I’m getting to know them and I’ll go back to add little facts about them or physical mannerisms that have developed.

Q.  Can you tell us a bit more about your new books?

A.  Back in the late 90s, while looking for a publisher for the Black Magician trilogy, I wrote a book called Angel of Storms. The sorcerers within the story could move between worlds like stepping between rooms. It contained a people called the Travellers – traders who followed a route through safe worlds that was passed down through the generations and altered as needed. Since the Black Magician trilogy did eventually find a publisher, who preferred I follow it with a series rather than a stand-alone, Angel of Storms was put aside. I’m glad it was, because at Aussiecon4 a panel I saw gave me an idea for another story that would fit in that book’s setting, and by blending the two I had not just enough story to fill a trilogy, but a story with a whole lot of new and exciting possibilities to explore.

In the first book, THIEF’S MAGIC, there are two main characters. Rielle is the only daughter of rich traders. She lives in a world where using magic is forbidden except by priests, who claim to do so is to steal from the Angels. In another world, where magic runs the machines that drove its industrial revolution, Tyen is a student of history and sorcery, and while on an expedition to dig up tombs and bring back the spoils to the Academy he finds an ancient book that speaks to him and claims to contain over a thousand years’ worth of knowledge from beyond his world. But using it comes at a price.

THIEF’S MAGIC is due out next May. I can’t wait to hear if readers have as much fun reading it as I did writing it! 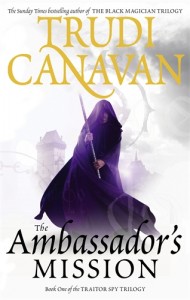 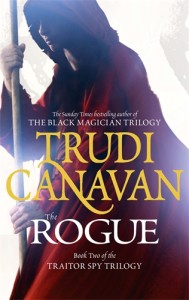 The Traitor Spy trilogy is out now in paperback.