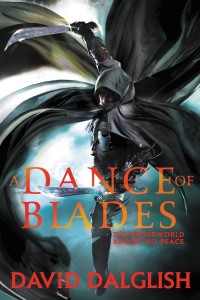 I’m worried I may just forever paint myself as a hack by revealing this, but Haern the Watcher started off as nothing more than my own personal Drizzt Du’Orden clone. To those who’ve read my self-published book The Cost of Betrayal, where Haern made his first debut, this probably isn’t much of a surprise (nor to any of you who read my last post where I prattled on about how much I adored R.A. Salvatore). I had little of Haern’s backstory down in my head other than a few key highlights. He was meant to be the awesome swordfighter, the amazing dual-wielding blademaster that could take down any foe I needed to die, and who could train the main hero of the book in the art of battle. If I ever put my characters in a situation a bit too insane, I could always count on Haern to do something stupid/awesome to bail them out.

Well…people liked Haern. A lot, in fact. In that first book, he’d already established his fearsome reputation as the one willing to make the hard decisions even if others weren’t. He was brutal, but had a sarcastic sense of humor. Unstoppable in a fight, yet still shy around the girl he loved. Willing to go headfirst into a fight with a demigoddess… all because he tied a ribbon to a baby’s crib as a mark of his love and a promise of his protection. Honestly, there was a lot of me in him, peeking out from behind the badass persona, and that probably is what kept him from becoming a total caricature.

After two more books with Haern stealing the show, I decided to finally delve into Haern’s backstory. I had plenty of stuff to fill in, for the only real bit of his past I had revealed was that of his father, Thren Felhorn, and how Haern had turned against his brutal training and desires to craft him into the perfect assassin.

So with just that single key idea, of Haern as the son of Thren Felhorn, only to secretly rebel against him under a new name, I began writing A DANCE OF CLOAKS (US | UK | AUS). This was my chance, my way to figure out how such a rebellion might take place. Haern became Aaron Felhorn, a shy child growing up in his father’s shadow. His every day is spent preparing for the eventual takeover of his father’s criminal empire. Yet the influence of others, good men and women also entangled in Thren’s web, helped give Aaron a glimpse at something more, of a life where the strong protected the weak instead of preying upon them.

And then came A DANCE OF BLADES (US | UK | AUS) , fulfilling every bit of promise I’d begun with A DANCE OF CLOAKS. After Haern’s five hard years living on the streets of Veldaren, I finally had my chance to show him become the legend he was always meant to be. His mindless revenge and vigilantism would evolve into something greater. The hope that was always an important part of his character could flourish. I’d drag him up from the very gutters he slept in to take control of an entire city.  Yet he’d do it with friends at his side, relationships that would last long into the Shadowdance series and beyond. Suddenly I had a character who sought redemption for his reckless vengeance, who was willing to let go of his hatred and become a better man for his friends, who would risk his life to fulfill the total opposite of the destiny crafted for him by his father, not out of revenge, not out of pride, but simply because it was the right thing to do.

Suddenly I had a character who was no longer a Drizzt clone in my head. Now he was Haern, the Watcher of Veldaren and proud member of the Eschaton Mercenaries, and I couldn’t be happier with the result.

Book two of the Shadowdance series, A DANCE OF BLADES, releases today! If you’re new to the series then check out this excerpt from the first book, and here’s the best news — you won’t have to wait long for the next novel once you’ve finished books one and two. A DANCE OF MIRRORS (US | UK | AUS), releases next month!