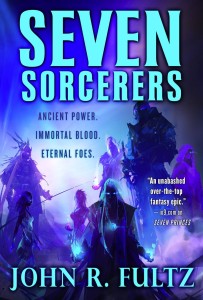 “This is the end, beautiful friend…”  ― Jim  Morrison

“Everything has to come to an end, sometime.”  ― L. Frank Baum

With the final book of the Shaper Trilogy being released, lately I’ve been thinking about Endings. It occurs to me that the most important part of any story is The End.

The End supports and honors everything that comes before it. Nothing in a story escapes the ending of that story. All the characters you love, the adventures that thrill you, the experiences that move you on the most basic of human levels, the emotional connections that make stories so powerful…all of these things are magnified, framed, and validated by a good Ending. The End of a story creates a reverse “ripple” effect that travels backwards across the length and breadth of the narrative. If the Ending isn’t right, it can ruin the entire story.

A good Ending provides closure and satisfaction–even when it is bittersweet, unhappy, or tragic. Some stories cry out for that tragedy. Should HAMLET have turned into a comedic farce in the final act? Not without completely dishonoring the story. Shakespeare gave his tale the end that it truly deserved. If Romeo and Juliet had not died, what power would their story hold for us today? What could befit those star-crossed lovers more than being eternally united in death? They died as they loved–senselessly, blindly, and violently. They earned it.

The reader of any given story expects a reward or payoff for investing time in that story. We read and read and are carried along by the rushing tide of characters, plot, and setting, but our ultimate goal as Consumers of Story is to reach The End. Therefore, the ultimate goal of any narrative is its Ending.

Aristotle stated that “A whole is what has a beginning and middle and end.” This sentiment became the basis for the three-part plot structure that underlies all of modern storytelling. Even in the classic Five-Act Play, acts 2, 3 and 4 are generally divisions of an extended Act Two. But was it Aristotle who invented the idea that stories must have a beginning, middle, and end? No, there were stories being told long before the Greek made his famous observation. Artistotle simply payed attention to the world around him, as philosophers do, and he noticed this underlying structure that supports all of human life.

Birth, Life, Death. Beginning, Middle, End. There it is in its simplest form. How fitting that in many ancient cultures the prime objective for members of the warrior class was “to die a good death.” The Vikings wanted to perish in battle, not in a sick bed (the “straw death”), because battles make for great Endings. The ultimate goal of life is to live well. To live fully is to regret nothing, to leave the world a little bit better than you found it, and to retire from it in grace and dignity. As every life deserves a “good death,” every story deserves a good Ending. In fact, readers demand it.

The Ending is also the consummation of a spiritual compact between Writer and Reader (or Storyteller and Listener). Nobody engages themselves in a story with the belief that an ending will be denied them. It’s in our nature as human beings, our archetypal consciousness, our very souls, to seek an End. Our everyday lives very rarely offer up “satisfactory conclusions,” or “happily ever after” situations. Life is instead an ongoing process, with each experience leading to the next, cause and effect ruling over all. There is no closure in “real life,” no “final page” to read with a contented sigh. There is only tomorrow, and the next day, and the next.

Ah, but in the world of the Narrative–in the communal magic of the Story–we can enjoy that illusion of finality, that sense that something is well and truly DONE. For a moment, in the midst of our ongoing life-dream, we feel the awesome power of an Ending, and yet we live on. Through the spell of the narrative we experience both life and death without actually dying. In fact, we are empowered, uplifted, and enlightened by experiencing death inside the conceptual “safety net” of a narrative. Experiencing death–even on a totally fictional level–allows us to live more fully and completely.

The French coined the term “La Petit Mort” (“The Little Death”) to describe the moment of sexual ecstasy otherwise known as an orgasm. The reading of a story and the act of making love are analogous in this light. Without that culminating moment–however long it might be prolonged, teased, denied, or promised–both experiences remain incomplete. In our stories, as in the essential act of procreation, human beings crave the “Little Death” of the Ending. One is a transfiguration of the body, the other an exaltation of the mind. Both of them are good for the soul.

Without an Ending, there can be no new Beginning. Without death there can be no new life. Destruction precedes creation. What exists now paves the way for that which comes after it. If your favorite book or story never ended, it wouldn’t BE a story–it would be a conceptual prison from which you never escaped. Or an experience that you eventually were forced to abandon altogether. Rarely do we get the chance to completely re-start, re-invent, or re-design our actual lives. But in the context of the Narrative, we can have as many Endings and Beginnings and we choose. And that is some tremendous power.

A Story, by its very nature, requires an Ending. As Nietzsche said: “The end of a melody is not its goal: but nonetheless, had the melody not reached its end it would not have reached its goal either.” A melody–like a story–is defined by where it starts, where it goes, and where it ends. Yet the whole of the story is greater than the sum of these parts, and that synergy is the magic of storytelling.

SEVEN SORCERERS (US | UK | AUS)  is the closing volume in my BOOKS OF THE SHAPER Trilogy, which began with SEVEN PRINCES (US | UK | AUS)  and continued in SEVEN KINGS (US | UK | AUS). I knew this third and final book had to be the Big Payoff, the Great Reward, the Ultimate Goal of the entire series. I was determined to make it the best of the three volumes, a Grand Finale that readers would never forget. So I set out to give this epic construct the conclusion it deserved. To honor what came before, to make good on that spiritual pact with my readers, nothing less would do.

Writers are driven by their internal ambition, so I set certain challenges for myself when writing SEVEN SORCERERS. I had never written a double-gender character before Sungui the Venomous; never embraced the viewpoint of a full-blooded Uduri Giantess until Dahrima the Axe; never mixed first and third person in the same narrative, or past and present tenses, until I entered the headspace of Iardu the Shaper; I had never staged such massive conflicts or unleashed such earthshaking power. And I had never written the final volume in a three-book trilogy.

These challenges drew me onward through the story, seeking always for its Perfect Ending.

With a little help from the Shaper, I found it.

Now our great spell is done, our shaping at last complete. 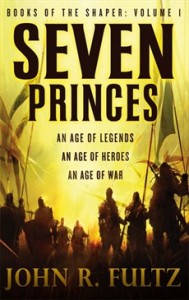 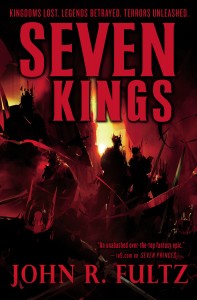 SEVEN SORCERS is available now! Look for the Books of the Shaper trilogy online and in stores everywhere.