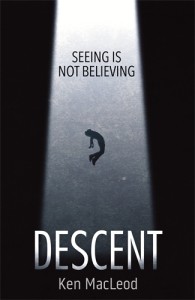 Ryan, the star of Ken MacLeod’s latest SF thriller, DESCENT, had a childhood encounter with an unidentified flying object in the hills above his home town. He’s done his research – he knows of all the hoaxes, justifications and explanations for UFO sightings, but can’t even begin to explain what happened to him. And in a future Scotland where nothing seems secret, where everything is recorded on CCTV or reported online, why can he find no evidence that the UFO ever existed?

DESCENT (UK|ANZ) is a science fiction story for the 21st Century – a story of what happens when conspiracy theorists take on Big Brother. To celebrate its release today, here’s our rundown of some of the weirdest reported alien encounters…

‘Space Brothers’, ‘Nordic aliens’ or even ‘Pleiadians’ are the blond, beautiful human-looking aliens who many UFO believers have reported communicating with since the 1950s.

The first person to report contact with this type of alien was George Adamski, who reported seeing UFOs twice with friends before deciding on the third time that the craft must be looking for him! Separating from his friends, he saw the craft land and a blond man emerge, who claimed to be an alien named Orthon, who warned Adamski of the dangers of nuclear war and took him on a trip around the Solar System. That wasn’t the end of it, either – in the sixties Adamski claimed to have attended an interplanetary conference on the planet Saturn.

Once upon a time people would tell stories about how they were kidnapped by fair, beautiful elves in the woods – now it’s beautiful aliens. Why the obsession with blondes, though? It’s all a bit disturbing. (Some theorists have claimed ‘Orthon’ was a lost Nazi soldier testing a new aircraft.)

The Hopkinsville goblins were the creatures reportedly seen by two families in Christian County, Kentucky, in 1955. They had pointed ears, silver skin and were small – around three feet tall – with long, clawed arms and small, stumpy legs.

After seeing flickering lights in the sky, and hearing strange noises outside their farmhouse, the Sutton family went outside to investigate. There they saw one of the creatures and shot at it, to no effect, retreating inside the house when another appeared.

Rather than sharing a message of peace and love like ‘Orthon’, these creatures just seemed to want to have fun. Although they did not harm anyone, they ‘terrorised’ the family by jumping at windows, scaring the children, leaping on the roof and generally making a nuisance of themselves – sounds like revenge for the shooting incident, to us!

The police were called, and although they did not see the creatures, the sighting is unusual both for the number of people involved, and the fact that the family did not seek publicity – moving away from the area when UFO seekers became too much to handle.

The first widely publicised alien abduction claim was reported by Betty and Barney Hill of Portsmouth, New Hampshire in 1961. The couple said they were driving home when a strange glowing object in the sky began to follow their car, eventually forcing them to a stop. Barney got out of the car with his pistol for a closer look, but ran back to the car shouting “They’re going to capture us!”

At this point the couple said they experienced a time distortion, finding that hours had passed, and they and their car had travelled 35 miles south but had no recollection of the stretch of road, nor where the craft had gone. They reported the craft to the United Air Force the next day, and saw a hypnotist to deal with the strange dreams and anxiety the sighting had caused.

This famous sighting – which now seems to have set the pattern for alien abduction stories – was not widely publicised until a journalist for the BOSTON TRAVELLER got hold of their hypnosis tapes in 1965. The details found under hypnosis fascinated the public, such as Betty and Barney’s recollections of the aliens (small, grey men with large eyes), the medical examinations the aliens gave them, and the ‘star map’ shown to Betty.

Interestingly for the believers of this story, Betty’s star map – showing an unknown constellation, was mapped to known space using information published in a 1969 GLIESE STAR CATALOGUE – information Betty could not have known in 1961.

The Flatwoods monster has to be one of the weirdest looking aliens we’ve ever heard of! It’s also the only one who wears a skirt . . .

Described as at least three metres tall and human-shaped, this alien has a glowing red face, a cowled head with bulging, saucer-like eyes and a green body, with a green pleated skirt. Some of the witnesses say it had no arms, while others described short, skinny arms ending in long, clawed fingers. (We’d have just said ‘T-Rex arms’.)

This alien was reportedly spotted in Broxton County, West Virginia, in 1952. Boys playing in the area spotted a glowing craft crash land in the forest. Seven people set out into the woods to find it, including the boy’s mother and a National Guardsman. Coming upon the creature in a clearing where its glowing craft lay stranded, the group say they ran away when it darted towards them, eyes glowing.

No wonder they say they ran away – this artist’s rendition of the creature is pretty creepy! Sheriffs who investigated the scene the next morning could find no craft and no creature, but did report a burnt, metallic small pervading the area.

We’re counting this one as a ‘weird’ UFO sighting not just because great floating objects in the sky are pretty weird, but because of how recent it is and how many seem to take it seriously.

On November 7th 2006, at 16:15 the federal authorities at Chicago O’Hare International Airport received a report that twelve airport employees were witnessing a metallic, saucer shaped craft hovering over Gate C-17. After two minutes it flew swiftly into the clouds, leaving a hole in the cloud layer.

Both United Airlines and the Federal Aviation Administration (FAA) denied that they had any knowledge of the UFO, but when the CHICAGO TRIBUNE filed a Freedom of Information request, it showed that United Airlines had called the FAA about the UFO. The FAA stated that they would not be investigating the UFO claim, but UFO believers point out that this goes against their policy regarding possible international security breaches at United States airports, especially ones seen by so many witnesses.

There is reportedly so much left to uncover about this sighting that GHOSTBUSTERS actor Dan Aykroyd is investigating it for an upcoming documentary!