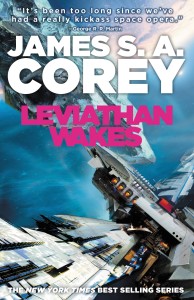 The Expanse is coming to TV.

In thrilling news, the SyFy channel have commissioned a 10-episode television series. The script will be written by Academy Award-winning writing duo Mark Fergus and Hawk Ostby, who count Iron Man and Children of Men among their credits.

Here’s author James S. A. Corey with the scoop on how it all came about:

So here’s what happened.

A few years back the Expanse books were out and doing pretty well, which was cool.  Through our agent, we had a television agent in Hollywood – a fella named Brian Lipson – who was there to address any inquiries about the film and TV rights.  That was a really pleasant place to be.  We had a good publisher, a series that was getting good reviews, and a plan for what the next few books could look like. The rest of that – the TV guy, the rights, that stuff – it was the same level of CYA as flossing your teeth and doing your taxes.  It’s what you do because it’s what you do, not because we expected anything to come from it.

And then there was this party in Los Angeles and Jason Brown and Ben Cook had a conversation.  Jason had been looking for something in the science fiction line, and Ben passed on a recommendation of this book he’d read and liked called Leviathan Wakes.  And in an unexpected twist Jason talked to people Ty knew from Game of Thrones about wanting to adapt Leviathan Wakes and those people emailed Ty and said do you know this guy named Jason wants to buy your book.  So that was weird.

So then our TV guy – Brian – called us and told us that the books were getting some interest, and that he’d been looking specifically for folks who had screenwriters already lined up as part of the deal.  We had some phone conversations with a few sets of folks, and one of them was Jason Brown.  He worked with the producer Sean Daniel, who could bring the writers Mark Fergus and Hawk Ostby to the table, the guys who wrote the first Iron Man movie and Children of Men.  They weren’t the only good writers in the mix, but they were the only ones who wrote Iron Man and Children of Men.  We managed to mostly keep our cool, nod sagely and say, yeah, they seem good.  Let’s go with them. And then after we got off the phone we could talk about how cool it was that guys like that would be fans of our books.

And then we were out in Los Angeles on a different trip when Mark and Hawk were there, so Ben Cook and Jason Brown got all of us together for lunch and we talked about the books, and what we had in mind for them, and what the themes were that we saw in them, and what the themes were that they saw in them, and what the end of the last book was, and what the secrets were that we’d hidden in the first couple books and what they meant and the back stories of the main characters that we hadn’t laid out.  And then, before too long, it wasn’t lunch anymore, so we had dinner too.  Mark and Hawk who had lives and families eventually left, but we kept Jason and Ben for another few hours trying out the bar’s drink selections and geeking about how much fun it would be to make a TV show.  Haha, will never happen, let’s joke around about it.  So I guess the joke was on us.

Mark and Hawk had – and have – a hell of a job.  They took the books and our conversation (along with a few more we had) and with Jason and Sean Daniel, they worked up a pitch to take to production companies.  When the time came to go make the sale, we rode along to answer any questions folks had about the underlying material.  And there was a week last summer when we were out in LA meeting with a bunch of companies Sean Daniel and Jason Brown had lined up.  As I recall it was six or seven meetings in something like four days.  And one of them was Alcon.  We tried to stay quiet, answer questions when asked, and not constantly blurt out “Holy crap are you seriously talking about turning our book into a TV show?”  They consider those outbursts unbecoming.

So picture you’re sitting in a conference room with the guys that wrote Iron Man and seeing if maybe Sharon Hall (whose last big project was developing a show called Breaking Bad) and Ben Roberts (formerly an executive on Walking Dead) would like to do business with you.  It was like that, only if anything weirder.

Turned out they did.  They bought the option from us and Mark and Hawk started writing a script.  Mark and Hawk came out to Albuquerque and hung out for a few days, while we talked about everything from how thrust gravity works to what the differences are between the ships to the mixed time sequence of the prologue of Leviathan Wakes (here’s a hint: when Julie hears the weapons firing, you’re already several chapters in).  Slowly, carefully, they put together a take on Leviathan Wakes that was perfectly true to the book and also absolutely their own.  There is nothing cooler than seeing something you’ve made inspiring someone else to make something in a different medium that catches everything you intended and makes it work without it being locked into it.  It’s what I imagine dancing would be like if we could dance for crap.

And then, last Friday the word came down.  Syfy fought to the top of the pile, and had ordered a full first season of the show.  We’re on.

Praise for The Expanse series:

‘As close as you’ll get to a Hollywood blockbuster in book form’ – io9.com

‘The best space opera has to offer’ – Library Journal