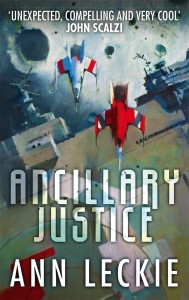 The British Science Fiction Association (BSFA) Awards were announced in a ceremony two days ago at the Satellite 4 Eastercon 2014 in Glasgow.

Ann Leckie and Gareth L. Powell made history by being the first winners to ever tie for position in the Best Novel Award, which has been awarded to both authors. Ann won with her debut space opera ANCILLARY JUSTICE and Gareth with alternate history adventure ACK-ACK MACAQUE.

Ann had twice the reason to celebrate over the Easter weekend, with her place on the Hugo Awards’ Best Novel shortlist announced just the day before! She was joined by other Orbit authors Mira Grant (for PARASITE), Charles Stross (for NEPTUNE’S BROOD), and Robert Jordan and Brandon Sanderson (for the Wheel of Time series).

See all the BSFA winners including Best Short Fiction, Best Non-Fiction and Best Art at the BSFA website. Many thanks to Dan Franklin for collecting Ann’s award.