At last. The event that thousands of you have scribbled in your diaries (or typed with equal fervour into your digital calendars) is finally here: the publication of Anthony Ryan’s TOWER LORD.

Rewind to September 28th, 2012. FantasyCon, Brighton. A gloriously hot day where the town’s population were doing what British people do when the weather’s nice: flock to the beach, use disposable BBQs that don’t really work, and get sunburned.

Anne Clarke – then Editorial Director of Orbit UK – and I snuck out of a launch party (not our own party, I should add) to discuss a book that we’d just received on submission.

‘I’ve only read about 100 pages,’ I replied, blinking against the sparkling of the sun on the sea. ‘But yeah, it’s good. In fact, I think it’s really good.’ (I think I might have actually looked around in a conspirational manner as I said this. In my defence, most of the great and good of London genre publishing were only just out of earshot.)

“Well,’ Anne replied with a knowing nod. You ought to read the rest. Quickly.’

So I did. The following day I read for seven hours straight until I finished the book. It took about the same amount of time afterwards to comprehend just how fantastic it was. We bought the book that same week in a hard-fought auction and published it the following spring.

That novel was Anthony Ryan’s BLOOD SONG (UK | ANZ), which went on to receive universal acclaim and become the UK’s bestselling epic fantasy debut in 2013. 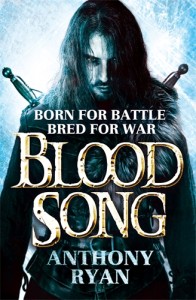 I’ve written before about why I love this book so much (crisp prose, visceral action sequences and a suitably conflicted hero, in case you can’t be bothered clicking the link). I was delighted to see that tens of thousands of readers loved BLOOD SONG for exactly the same reasons I did. Even Amazon felt the same way, making BLOOD SONG their favourite SFF book of 2013.

But once the dust has settled, you’re left pondering the inevitable question: how will the next book measure up? After all, the road to publishing hell is paved with ‘difficult’ second novels.

The answer, I’m pleased to say, is that TOWER LORD is an even better book than its illustrious predecessor.

I won’t say much more, save that TOWER LORD retains all of the best elements of BLOOD SONG (the exciting action scenes, the razor-sharp intrigue and the wonderful characterisation) as well as broadening the scope and raising the stakes even higher. We meet some fascinating new characters (including, I should add, some excellent female protagonists) and get to explore some thrilling new places. And then there’s the jaw-dropping revelations about – ah, but I’ve said too much already.

If you loved BLOOD SONG, you’ll love TOWER LORD. If you haven’t read BLOOD SONG, then I suggest you read it immediately (unless you’re operating heavy machinery). And if you didn’t like BLOOD SONG, well . . . I’m afraid you’ll feel a bit lonely, as there’s not many of you.

TOWER LORD is out now in hardback, ebook and audio.

I’ll leave you with a quote from the book:

‘It’s always the way with great men, they can’t see the knives of those who live in their shadow.’