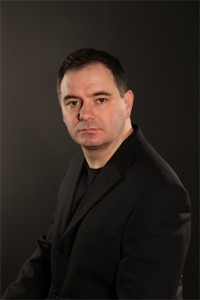 What do you do when you’ve written three of the most popular epic fantasy novels in recent years? Well, if you’re Anthony Ryan, you write something even more epic – and throw lots of dragons in for good measure. Not to mention an extremely liberal dose of exploration and adventure, agents and espionage, ingenious weapons and explosive magic…and an ancient myth that might prove decisive in the furious battle for empire. Sounds good, right?

THE WAKING FIRE, the first book in the Draconis Memoria series, has all of this and much, much more.

Anthony has always created memorable characters, and the protagonists of his latest tale are his finest creations yet. Clayton Torcreek is a straight-talking small-time criminal, while Lizanne Lethridge is a formidable spy and assassin. Both of them are ‘Blood-blessed’ – able to consume the blood of wild drakes, which grants them spectacular abilities.

As the Ironship Protectorate and the Corvantine Empire prepare for war, these two individuals will both find themselves embroiled in the ongoing hostilities. Clay must venture into the uncharted wilds in search of an expedition that disappeared under mysterious circumstances, while Lizanne must go undercover in enemy territory in order to locate an ancient artefact that may just swing the balance of the war – but only if she can reach it first.

THE WAKING FIRE is, quite simply, an absolute blast. Existing fans and new readers alike will find a huge amount to love about this fantastic new series.

Orbit acquired UK & Commonwealth rights to the Draconis Memoria series from Paul Lucas at Janklow & Nesbit, in a three-book deal. THE WAKING FIRE will be published in July 2016, in hardback, trade format, ebook and audio editions.

Anthony Ryan is the New York Times bestselling author of BLOOD SONG [UK/ANZ], TOWER LORD [UK/ANZ] and QUEEN OF FIRE [UK/ANZ]. He lives in London and is a full time writer. He can be found on Twitter as @writer_anthony