We know you’ve been waiting for Lila Bowen’s MALICE OF CROWS ever since CONSPIRACY OF RAVENS (US | UK | AUS) left you on the edge of your seats. Get ready for another death-defying mission armed with nothing more than two wings and a gun. 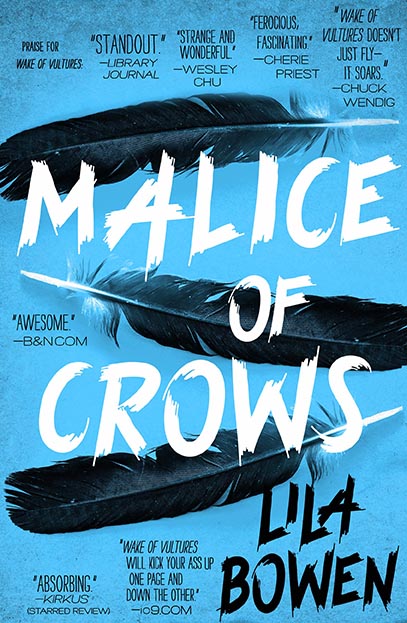 Rhett has just shut down a terrible enterprise running on the blood of magical folk, but failed to catch the dark alchemist behind it. Now, he must make the ultimate transformation if he has any hope of stopping the alchemist or fulfilling his destiny; he must become the leader of a new Rangers outpost—the Vagabond Monster Posse.

To save his friends, and the lives of countless others, he’ll first have to lead them on a mission more dangerous than anything they’ve ever faced.

Readers and reviewers alike have fallen for Lila Bowen’s Shadow series. If you haven’t had a chance to pick up WAKE OF VULTURES (US | UK | AUS), you can dive into this sample chapter now.

“Bowen’s Wake of Vultures overflows with imagination and voice, channeling shades of Stephen King’s Gunslinger and Western classics like Unforgiven. Nettie Lonesome is sure to become one of the iconic characters of this generation. This book puts you under its spell and will not let you go!”— Jason M. Hough

“Of all the books I’ve reviewed this year, Wake of Vultures‘ Nettie Lonesome stands out as the most compelling, well-crafted protagonist I’ve encountered… Bowen’s superlative grasp of both character development and worldbuilding elevates a familiar story to mythic heights.”—RT Book Reviews (Top Pick!)

“Wake of Vultures is, quite simply, brilliant. A mind-bending mix of history, fantasy and folklore, it’s a wild bronco of a read that’ll leave you breathless for more.”—Rachel Caine

“I don’t care what else you’ve seen in the bookstore today. Buy this book because it’s the thrilling, delightfully written, and important one you’ve always wanted to read.”—Kevin Hearne

“Lila Bowen brings in a wild fantasy quite unlike anything I’ve ever read, with a voice that’s weird and wonderful. Bowen is truly a talent to watch.”—Chuck Wendig

“Nettie Lonesome is a complex, tough, all-around wonderful protagonist. And Lila Bowen is equally wonderful for bringing us Nettie’s story, set in a magical old west full of harpies and monster-hunters and stolen children and more. I look forward to more of Nettie’s journey.”—Jim C. Hines