We’re thrilled to reveal the cover for BLACKFISH CITY by Sam J. Miller, courtesy of Little, Brown’s very own designer, Ellen Rockell. Feast your eyes on this beauty: 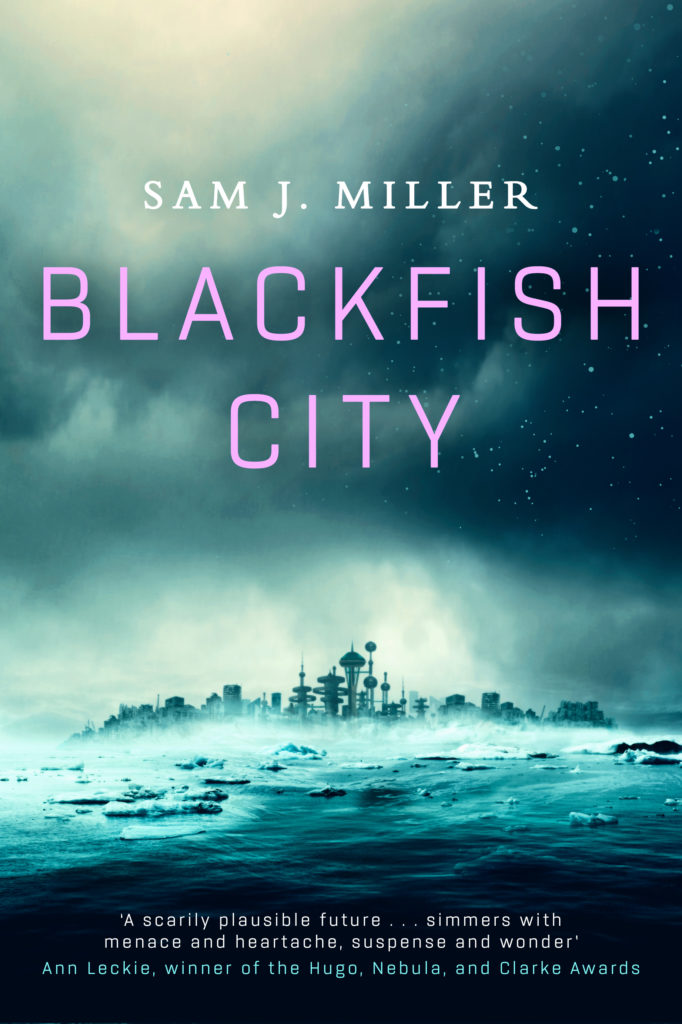 Publishing in April 2018, BLACKFISH CITY is a mesmerising, fearlessly imagined novel from an exciting new voice in science fiction.

After the climate wars, a floating city was constructed in the Arctic Circle. Once a remarkable feat of mechanical and social engineering, it has started to crumble under the weight of its own decay – crime and corruption have set in, a terrible new disease is coursing untreated through the population, and the contradictions of incredible wealth alongside deepest poverty are spawning unrest.

Into this turmoil comes a strange new visitor – a woman accompanied by an orca and a chained polar bear. She disappears into the crowds looking for someone she lost thirty years ago, followed by whispers of a vanished people who could bond with animals. Her arrival draws together four people and sparks a chain of events that will lead to unprecedented acts of resistance.

‘Blackfish City is an exhilarating tour of a post-catastrophe future that’s both fantastical and eerily convincing . . . A saltwater-splashed refuge for misfits and cutthroats, teeming with mystery and intrigue, Blackfish City is a place you might never want to live in – but as a reader, you won’t want to leave’
Adam Sternbergh, author of The Blinds

‘Miller gives us an incisive and beautifully written story of love, revenge, and the power (and failure) of family in a scarily plausible future. Blackfish City simmers with menace and heartache, suspense and wonder.’
Ann Leckie, New York Times bestselling author and winner of the Hugo, Nebula, and Clarke Awards

Sam J. Miller is a writer and a community organizer. His debut novel The Art of Starving, was called ‘Funny, haunting, beautiful, relentless and powerful . . . a classic in the making’ by Book Riot, and received starred reviews from Kirkus, Booklist and Publisher’s Weekly. His stories have been nominated for the Nebula, World Fantasy and Theodore Sturgeon Awards and have appeared in over a dozen ‘year’s best’ anthologies. He’s a graduate of the Clarion Science Fiction & Fantasy Writers Workshop, and a winner of the Shirley Jackson Award. He lives in New York City.