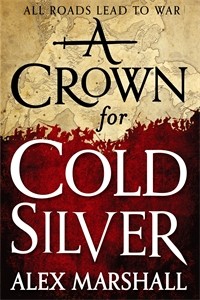 What are you reading at the moment and who are the fantasy authors you come back to time and time again?

How much trouble will I be in if I admit I’m only now reading A Game of Thrones? I am also a fan of the ongoing comic series Rat Queens, and Gail Simone’s run on Red Sonja. If I start listing my favourite go-to fantasists I’ll never stop, but I do think C.L. Moore, Charles Saunders, and Michael Shea all deserve far more attention than they receive these days.

A CROWN FOR COLD SILVER has a diverse cast and doesn’t necessarily conform to the power structure on display in more traditional fantasy. Is this diversity something you set out to achieve, and was it difficult?

My initial response was to answer yes for the first part of the question and no for the second, but that’s not strictly accurate. The novel didn’t take the shape it did because I set out to write a diverse fantasy, but because those were the characters and the world that I wanted to write. Diversity was the result, but the impetus was simply exploring the lives, struggles, and societies of interesting characters. And while I was tempted to say it wasn’t difficult to achieve diversity with the novel, that isn’t quite true, either – of course it took a lot of effort to create these characters and their cultures, but I think good writing is always difficult, and so this aspect of the novel wasn’t unique in that regard.

The Star, the world you have created for Zosia and her five villains, has five points, many different cultures, and different terrains filled with hostile armies and man-eating creatures. Which part of the Star would you live in if you had to pick? How long would you last?

The Immaculate Isles – they’re called “Immaculate” for a reason, with tranquil beaches, warm blue seas, and excellent cuisine. Being one of the continent’s most developed regions, I’d probably be able to stay alive for more than a week or two, which is another plus.

A CROWN FOR COLD SILVER is the first in a trilogy. What can we expect from the series?

Expect the stakes to raise with each volume – there are no easy resolutions in this series, and the decisions the characters make in the first book will dramatically effect not just their own lives but the fate of their world. Obviously epic fantasy has a long and proud tradition of putting the entire globe in peril, but I think even veteran readers will be caught off-guard by how the trilogy plays out.