The Merron are a fiercely proud and independent nation, self-reliant and bowing their knee to no royalty but their own. For centuries they have

followed the seasons as pastoral nomads, living off their tribal lands, and trading their famous crafts with the settled communities they call ‘village folk’ or ‘foreigners’ (choimhthíoch). However, their lives are rapidly changing for the worse. Under the violent and repressive rule of King Gunther Shirken and his heir the Royal Princess Marguerite, the Merron no longer have freedom of movement to travel with the seasons nor the right to follow their ancient way of life. They find themselves gradually squeezed further and further into confined territories of the Northland mountains, far from the grass plains they need to maintain their herds of horses, and far from the way of life which has provided for them for generation after generation. They see their people persecuted and their religious leaders tortured and killed as part of the Shirkens’ unrelenting effort to control all aspects of life in the Northland Kingdom. The Merron have become a desperate people, fast running out of time and options.

Each Merron clan has its own territory, and except for the annual gathering (an aonach) where the four tribes gather for a month-long fair, the clans rarely travel beyond the long established borders of their ancestral homes. To encroach on another clan’s territory would be a terrible crime against Merron civil and religious law. Should a clan be forced to make such a move, even against their will, it would be expected that they make great reparation to both their God and their fellow clans or else find themselves outcast from the nation. To travel to a land where no tribe has ever dwelled is to move far from the sight of God (an Domhan). Should a clan find itself the first Merron in a new land, they would need to ‘make a bridge’ between themselves and an Domhan and so awaken god to their presence. Failure to do so would condemn them to an existence separated from an Domhan and outside the natural order of things.

There are four tribes of Merron: Snake, Hawk, Bear, and Panther. Though each tribe originates from a different area of the Northern Europes and each has slightly differing traditions and cultures, all consider themselves Merron and all speak the Merron tongue.  The noblefolk we meet in this book are envoys chosen by a council of all four tribes to negotiate on their behalf in the Southlands, and are religious and military leaders from the Panther and Bear tribes. Panther and Bear Merron would consider themselves the most traditional of the tribes, still following closely the fundamental principles of the Merron’s ancient religion. Bear and Panther Merron often refer to themselves as The People ( in reference to their being those most closely linked to An Domhan) but any followers of an Domhan are entitled to be considered one of The People.

The People practice an extreme and fundamental form of pantheism. To them, god is everything and everything that exists is but a manifestation of god. So to the Merron a human being is the same as a tree, a tree is the same as a rock, a rock is the same as a dog – because all of them are god in its many forms. God’s most pure expression – its consciousness or its soul, if you like – is referred to as Croaí an Domhain (The Heart of the World) and when a Merron dies he or she may walk with or within this consciousness as an honoured and beloved manifestation of God’s heart; at once one with God but retaining their own individual personality and thoughts.

An Domhan’s most treasured representatives amongst the living are those people called the Caorigh(pl.). They are considered to be the closest of all living creatures to Croaí an Domhain and as such are worshiped as the purest manifestation of an Domhan. They usually live long and honoured lives amongst the Merron, during which they lead Merron religious ceremony, offer their blood as sacrifice to an Domhan and take ‘vision quests’ in order to divine the future or communicate 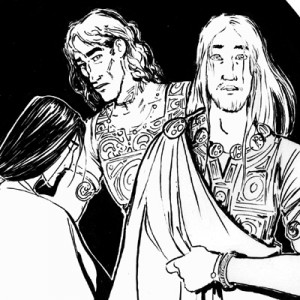 with an Domhan. As with all Merron ranks and higher professions, the title of Caora is hereditary, so the children of Caorigh will inevitably grow up to be the next generation of Caorigh. Sometimes it is an Aoire who will father or bear the child of a Caora but mostly Caora of one clan will reproduce with those of another. In general there can only be one Caora per clan, but for a Caora to have a multiple birth (twins, triplets etc) would be considered fantastically auspicious and those children would be particularly honoured by the clan into whose care they were eventually given.

The Caorigh are protected by a group of warriors known as na (fír/mná)Fada (the Long (Men/Women)) Born into their titles, na Fadaí (pl.) are sent to special camps where they are trained from childhood to defend the Merron faith. In ancient times they would have been the enforcers of religious law. Their duties would have included punishing dissenters and ensuring strict adherence to the religion’s rules. In the Crowded Shadows, na Fadaí that accompany Úlfnaor are there as much to ensure he fulfils his duty as they are there to protect him.

As an Domhan’s most honoured representatives amongst the living, the Caorigh are the highest authority in Merron religious matters. Their word is final when it comes to religious law. However most Caorigh are happy to leave everything to their Aoire (Shepherd) and it is the Aoirí (pl.) who truly wield all the power and carry all the responsibility for religious and

The Merron are very keen on openness and overt shows of honesty and trust. They openly wear the symbols of their tribal affiliations on their arms and in painted symbols on their horses and homes. They take offence at the slightest implication that they may be untrustworthy or criminally inclined and make a show of offering the same trust to visiting members of other tribes or clans.

Names are extremely important as a Merron name tells that person’s family lineage, their profession, their hereditary titles and sometimes ( as with the name Garron) the place where that person was born. The exchange of names is a sign of trust and acceptance. You must be invited to introduce yourself to a Merron – especially a Merron nobleperson. To just walk up and offer your name is a huge social faux-pas that would be accepted with resignation from a coimhthíoch but severely frowned upon from another Merron.

The wearing of long hair is a symbol of tribal affiliation. Up until a certain age (nine or ten) children of both sexes wear their hair cropped close 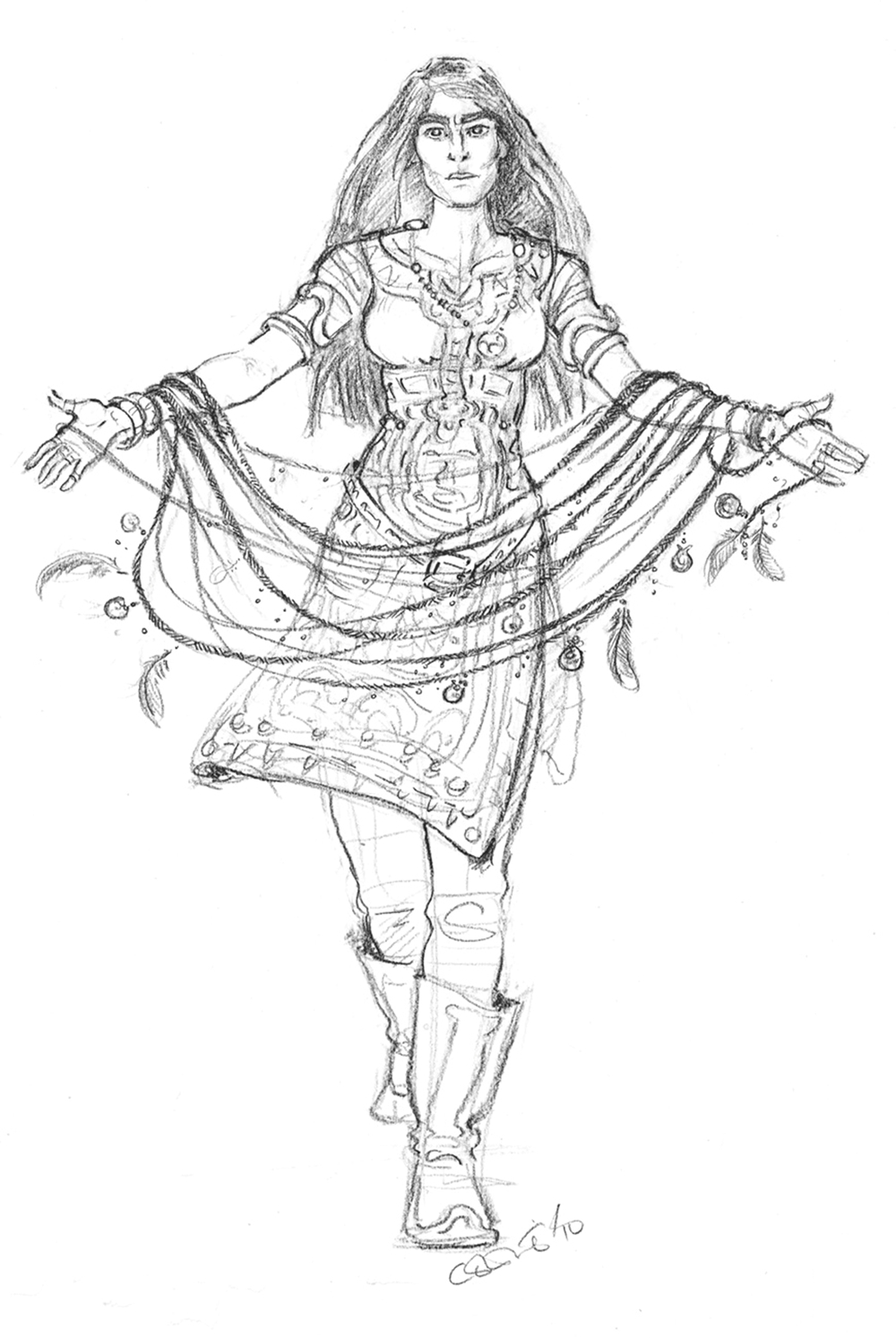 to their head, only being allowed to grow it long once they have been accepted as adult members of their tribe. Around this time they will also receive their tribal bracelets. For an adult Merron to have their hair shorn, or to shear their own hair, is symbolic of them having been cast from or breaking their affiliation with their tribe. In The Crowded Shadows Sólmundr and Ashkr give Christopher a set of Bear bracelets to symbolise Christopher’s adoption into the Bear tribe. In reality, Christopher’s adoption would first have to be approved by an Aoire. Then he would need to be publicly ‘named’ by his adopting parent (in this case Sólmundr) who would cut and burn Christopher’s hair as a symbolic casting aside of Christopher’s allegiance to the Snake Merron and his starting anew as a child of the Bear. Due to the circumstances of The Crowded Shadows, Christopher’s adoption would certainly have been accepted by the Merron travel party, but soon as is possible ( probably at the next aonach) Sól and he will need to go through the full adoption ceremony – including the shearing of Christopher’s hair and Sólmundr’s publicly naming him as his son

This adoption would be a bittersweet acceptance for Christopher who has witnessed his ‘first father’, the filid Aidan Garron, struggle against his superiors in order to improve the lot of the Merron people. Aidan Garron understood that the Merron way of life was no longer sustainable, and he fought to preserve Merron tradition while trying to move his people forward as a nation. He knew that in order to survive the changes around them, the Merron needed to adapt. But in the end the struggle to change the Merron mindset proved too difficult, and Aiden Garron chose a life apart from the tribes rather then continue the fight to save them.

Christopher understands that in everything they do and say the Merron are upholding a code which outsiders find difficult to understand, and it is this which often leaves them open to misinterpretation. For example, though they are skilled diplomats and fluent in several Northland languages, the Merron in The Crowded Shadows insist on communicating via Hadrish, a language they barely know. To them this is a point of pride and personal honour, a gesture of respect to their guests. To outsiders it can make them appear ignorant, even brutish. In this, as in many aspects of their behaviour, the Merron stand in their own way. By refusing to bend to circumstance and adapt to their surroundings they are perpetuating the misunderstandings and miscommunication which may well be the undoing of their nation. For it is this vulnerability which Marguerite Shirken hopes to exploit to her own end, and so it may be that the pride and tradition which has kept the Merron strong for centuries may be the very thing which aids in their ultimate destruction.