Convergence was great fun, meeting up with a host of Orbit authors — Trudi Canavan, Karen Miller, Ian Irvine, Marianne de Pierres, Glenda Larke and Sean Williams — and generally hanging out, while recovering from jet-lag-extra. A number of topics recurred in conversation: the urban fantasy/paranormal romance market in Australia (yet to emerge in any significant way); the number of Australian authors now being published internationally (rapidly increasing); and the relatively few opportunities for new Australian authors to find a local publisher (a problem that the launch of Orbit in Australia will hope to address). 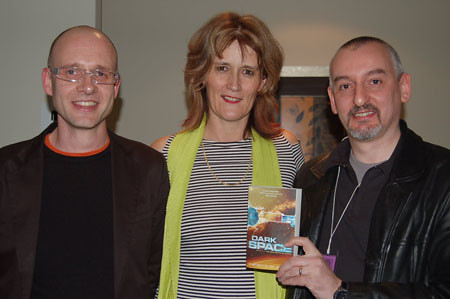 On to Sydney. Much of the Orbit UK list is sold in Australia by Hachette Livre Australia (when a British publisher acquires rights to a title, they usually acquire Australian rights at the same time) and it was excellent to meet the team there who have been doing such a fine job of it.

The principal purpose of the trip, however, was to discuss plans for the launch of Orbit in Australia, within their local publishing division. It was very exciting to be there for the announcement of the new Orbit publisher, the wonderful Bernadette Foley, reported here, and to work out the framework for the new imprint – when, what how, etc.

The launch of Orbit in Australia will mean that we have a publishing platform in the world’s three largest English-speaking markets. This isn’t unusual for a large publishing group, but it is unusual at the imprint level — and it’s certainly unusual for those publishers to work together as closely as we do.

On the way back, it occurred to me that Bernadette is the tenth Orbiteer — joining the five in the London office and four in New York. I couldn’t have imagined even as recently as a few years ago that we’d be in double figures … exciting times indeed.

So, back to New York, and the launch of Orbit in the US — after recovering from a second dose of jet-lag-extra, of course.