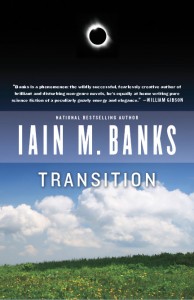 Orbit is pleased to note that this September, you’ll be able to hear as well as read Iain M. Banks’ forthcoming novel TRANSITION. Little, Brown UK announced today that the audio version will be simultaneously released as a free serialized podcast, starting on publication day, September 3.

After the first installment, there will be 23 further 15-minute episodes released on iTunes in the US and UK, every Thursday and Saturday for 12 weeks, until the entire novel is available.

Maja Thomas, vice president of digital publishing for Hachette Livre said “Hachette Digital is very pleased to participate in this collaborative marketing on an author we’re publishing internationally, and to bring Iain Banks to new listeners through iTunes.”

And, what does Mr. Banks have to say? “I had barely caught up with the later half of the Twentieth Century when here I am being ensnarled by gizmology from the Twenty-First. I am left breathless by the pace of technology.”