Last weekend I attended the fabulous World Horror Convention in Brighton, a celebration of horror fiction from the Victorian age to the 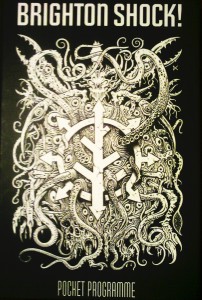 present, and the first time this event has been held outside North America.

Horror is a fascinating area and, as with SF and fantasy fiction, the definition seems interestingly fluid and has the capacity to evolve in new and exciting ways with each new generation of writers. We have the legacy of 19th century gothic horror (Mary Shelley, Edgar Allen Poe and Bram Stoker). This was followed by Lovecraftian horror, and more recently we have seen contemporary horror wordsmiths such as Stephen King, James Herbert and Ramsey Campbell.

One of the highlights of the convention was watching Neil Gaiman interview grand master of modern horror James Herbert (while I sat next to the agent who discovered him). Neil Gaiman appeared unannounced as a surprise guest interviewer, and it was as if Elvis had entered the building as news of his arrival rippled tantalisingly through the convention … James Herbert focused on his epic career and on his underprivileged East End origins which inspired him to write. It’s interesting to think how the supernatural thriller/disaster fiction of the 1970s and 80s, turbulent decades of wealth and deprivation lived under the shadow of the bomb, might differ to what is being produced today.

We now have an explosion of new vampire fiction, as Kelley Armstrong discussed with other notable writers on a panel entitled Life Sucks, an examination of vampire fiction. The horror tradition now includes elements of urban fantasy or paranormal romance, usually feisty, entertaining and somewhat lighter than ‘traditional’ horror fiction. And authors such as Tim Lebbon, Alan Campell and China Mieville are writing gritty fantasy with horror elements that you could call ‘dark fantasy’ … at least until 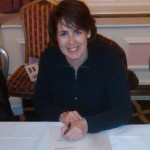 urban fantasy got hungry and subsumed it. See the ‘dark fantasy’ section in a bookstore near you. I attended Tim Lebbon’s reading of Echo City, and people seemed suitably impressed by its darkness (to be fully unveiled by Orbit next year).

But regardless of the label, horror fiction seems alive and well despite its zombie DNA. Horror fiction has been looking back nostalgically to its 80s mainstream popularity for some years, with the exception of the biggest authors, but more recently there has been talk of a revival. Books such as Pride, Prejudice and Zombies have caught the popular imagination and authors such as Joe Hill have also widened the appeal of horror beyond its core fans. We are now seeing British talents such as Tim Lebbon, Sarah Pinborough and Adam Neville bring new horror-influenced fiction to an interested market. And for Orbit, US-based authors Robert Jackson Bennett and Jesse Bullington have seen enormous

critical claim for Mr Shivers (US I UK I ANZ) and The Sad Tale of The Brothers Grossbart ( US I UK I ANZ) respectively. Then in June we have great hopes for our own zombie apocalypse, as it were, with the smart science-fictional/horror Feed (US I UK I ANZ).

It was great to meet new writers during the convention’s Pitch Black, where Donna Condon and I attended for Little, Brown. It was an afternoon where publishers and agents had ideas pitched to them by unpublished authors. The range of influences they quoted was interesting and the whole convention impressed upon me the rich literary heritage of the horror genre. I went home with a suitably giant reading list to add to my already giant reading list. It’s hard to name individually all the great authors, publishers, bloggers and award and convention organisers I enjoyed talking to, so I’ll just congratulate the no-doubt exhausted convention committee — headed by Amanda Fourbister, Steve Jones and Michael Marshall Smith. Thanks to them for organising this behemoth, and to all the convention staff for making everything run so smoothly. 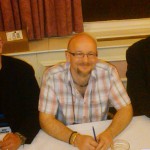 Also many congratulations to all the Bram Stoker award winners recognised for superior achievement: to Sarah Langan for best 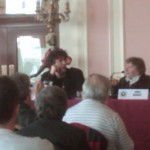 horror novel with Audrey’s Door; Hank Schwaeble for best first novel with Damnable; to Lisa Morton for long fiction with The Lucid Dreaming; Norman Prentiss for short fiction with The Porches of My Ears; editor Christopher Conlon for the anthology award with He is Legend; Gene O’Neill for the collections award with A Taste of Tenderloin; to Michael Knost for non-fiction with Writers Workshop of Horror and to Lucy A. Snyder for poetry with Chimeric Machines.