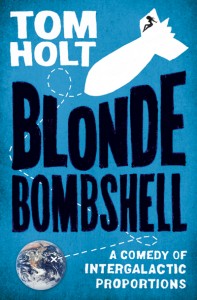 BLONDE BOMBSHELL is Tom Holt’s hilarious science-fictional debut and features one of the most fiendishly clever weapons of mass destruction you are likely to encounter. With the future of mankind possibly at stake, we did what any publisher would do. We asked the author some questions and then hid under a table.

10. How smart can a missile really be?

Not that smart, or it wouldn’t allow itself to get blown up to further a socio-political disagreement between partially evolved primates. I wouldn’t want to play chess with one, though.

9. Could the events you describe in the book actually happen?

Actually, they already did (see below; extensive research), though the Orbit guys have done a great job blaming the ash cloud on the Icelanders. As with all my novels, nearly all the non-fiction bits are partially true.

8. Did you do any research at all for BLONDE BOMBSHELL?

Extensive research, including spending ten months as a dog, which was great fun. Also, see above.

7. Without giving anything away, what happens at the end?

I haven’t actually read that far, but I assume Pat marries Chris and they move to Antigua.

6. What happens at the beginning?

You know, I’m glad you asked me that.

4. Who do you think would enjoy BLONDE BOMBSHELL?

People with taste, style and a great sense of humour. And bombs.

3. A reviewer once commented on your “dark underbelly.” How dark is it exactly?

Without losing a couple of stone, I can’t see for sure, since my light pink overbelly is in the way. Pretty dark, though. Harry Potter #6 dark, verging on puce.

2. What is your favourite SF joke ever?

You have to be a Trekkie, but … How many Romulans does it take to screw in a light bulb? One, and forty-six to blow up the entire ship to expunge the shame of the defective bulb.

1. Your next book is called LIFE, LIBERTY, AND THE PURSUIT OF SAUSAGES. Do you think it’s ever possible for a person to find perfect sausages?

Ah, but Man’s reach must exceed his grasp, or what’s a Heaven for?

BLONDE BOMBSHELL is out now in the UK and any day now in the US. We recommend buying two copies, just in case the first one doesn’t work properly.