I’m delighted to announce, after much careful tweaking, amending and perfecting, that we now have artwork for Gail Z. Martin’s The 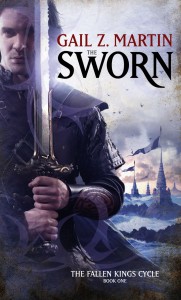 Sworn, book 1 in the Fallen Kings cycle (US I UK I ANZ). This is a new series but has many familiar faces from Gail’s Necromancer series, so will be great for new readers and Gail Martin fans.

We wanted something that would draw you into Gail’s world, that would hint at the action and pure thrill of her writing and I think Steve Stone has delivered something wonderfully atmospheric with this visual. Here be swords, brigands, dark magics and other forms of mayhem aplenty, so those seeking adventure between the pages need look no further.

In addition to saying something about this new book, we were also keen to produce something that would be in sympathy with the cover style of the Necromancer Chronicles, as this book is set in the same world as that series. But at the same time, we had to balance this against not wanting to reproduce the previous style exactly as this book is of course the start of something new. And to find out for yourself just how much excitement is in store, have a look at our first sneak preview of The Sworn with this early extract here.

You can also expect more from Gail Z. Martin all this week, as she will be talking about this new book as part of her Hawthorn Moon online book event. This has been a great success for several years now, so look out for interviews, giveaways, twitter-only extras, podcasts and much else!