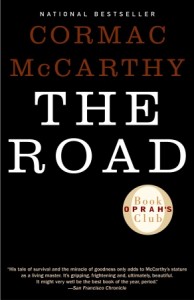 There seem to be two types of people who read Cormac McCarthy’s The Road—those who cry at the end and feel wrung out but deeply improved by the experience, and those who don’t see what all the fuss is about. Each of these types seems incapable of understanding the other. The moved readers suspect unmoved readers are callow or incapable of understanding McCarthy’s style, much less intent. Unmoved readers point to the relentless gloom of the subject matter, the repetition of dreary plot points, lack of conventional punctuation, and the cut-to-the-bone prose, and say they’ve certainly read better books. The internet carries conversations of people on the opposing sides, trying to convince their counterparts of the logic of their reactions to The Road, but no minds have been changed, as far as I can tell.

I suppose it’s to be expected that a book written with an extremely negative view of the natural state of humanity causes arguments. But this book is also about the persistence of love, the great love of a father for his son that flows from one soul to the other, even in that bitterly hopeless place.

Can you tell which view of The Road I hold? This former jarhead squirted tears like a character in an old Speed Racer cartoon as he read the ending. Some of you understand my reaction, while others might suggest that I shop for a good therapist. But McCarthy’s black masterpiece did more than cause me to squirt tears—I was so desperate to read more about the power and vulnerability of love at the end of the world that I wrote a post-apocalyptic novel of my own. (Other writers are also to blame for this obsession with apocalypse, including the artful gloom of Margaret Atwood, with her Oryx and Crake and The Year of the Flood.)

So, how did you feel when you arrived at the end of The Road? What book or author carries enough fire to make you want to write a book of your own?

(This is Terry DeHart’s fourth post on post-apocalyptic tales. The first three explored A CANTICLE FOR LEIBOWITZ ,I AM LEGEND, and EARTH ABIDES. His own contribution to the literature, his debut novel THE UNIT has been called by Publishers Weekly “a striking picture of human vulnerability and strength.”) and appears this month from Orbit.