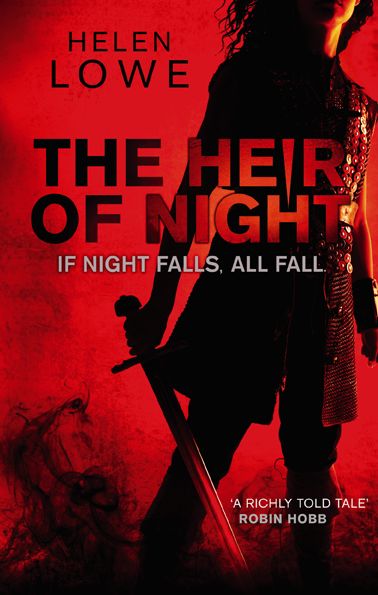 I am very excited to have such a fine cover to show off for our wonderful new fantasy The Heir of Night (ANZ | UK), book 1 in The Wall of Night sequence by Helen Lowe. To reference Orbit’s new survey of cover art, there are no unicorns or dragons here, but instead see a seriously on-trend sword, and some  fashion-forward, dark (and meaningful) mist. But the main thing is that it’s gorgeous, richly atmospheric and stand-out to go with the fast-paced breathtakingly good content inside.

The Heir of Night is Helen Lowe’s adult fantasy debut, and we enter a world where the violence of an age-old war casts a long shadow. There we meet Malian who, although she’s being trained to rule, is unprepared for the savagery of her people’s ancient enemy as they attack in the darkest part of the Night.

Helen may be new to adult fiction, but she’s already received critical acclaim for her previous YA novel Thornspell. Last year this won New Zealand’s prestigious Sir Julius Vogel award for Best Novel, Young Adult. Helen won the Vogel award for Best New Talent in the same year, so we are delighted she’s turned her hand to adult fantasy, and you can find a free advance extract for The Heir of Night HERE. The book will be out in Australia and New Zealand in Oct 2010 — and if you are going to WorldCon in September look out for Helen as she’ll be doing some panels and a pre-publication reading. UK readers will have to wait a little longer for the book until  March 2011. But rest assured, it’ll be so worth the wait!

Helen’s been hugely busy in the run up to WorldCon as she’s also preparing for New Zealand’s Christchurch Writers Festival and on top of that she’s just done a pre-AussieCon guest post on Marianne de Pierres’ blog.

I’ll leave you with a quote from Robin Hobb, which perfectly encapsulates this wonderful adventure:

The Heir of Night by Helen Lowe is a richly told tale of strange magic, dark treachery and conflicting loyalties, set in a well realised world’ Robin Hobb