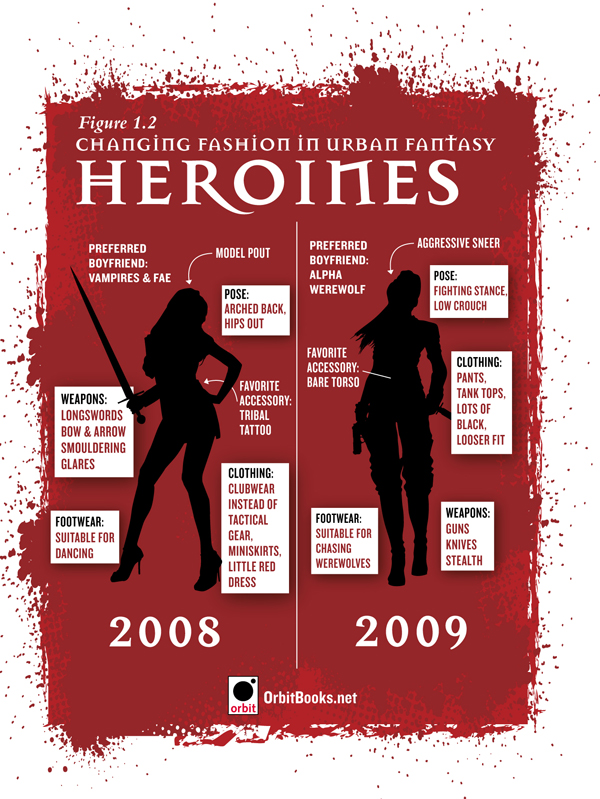 Every year we ask our summer intern to do a survey of cover art elements for the top US fantasy novels published in the previous year. This year we looked at covers from 2009, and compared them against 2008′s findings.

In our post yesterday we mentioned that we will probably retire the “damsel in distress” category next year.  That’s because while we counted fewer than 10 distressed damsels, we found more than 70 bad ass women —  and that’s with a really strict definition of “bad ass” (must be either armed, in a fighting stance, or riding a motorcycle). Thanks to  to the rise of urban fantasy (also known as paranormal fantasy) 2009’s covers were dominated by tough, well-armed women who are more likely to glower than cower.

1) Abs are in: Fantasy’s heroines are spending less time at the tattoo parlor and more time at the gym, as toned midriffs overtook tattoos as the favored accessory.

2) Stilettos are out: We observed a steep decline in stilettos in 2009, which just proves that fantasy readers can suspend their disbelief only so far. Romantic encounters between vampires, werewolves, elves, and humans are totally plausible, but believing that a professional demon-hunter would wear stilettos to kick demon ass isn’t. In another symptom of the same trend, corsets seems to be in decline. But fear not — cleavage, even if encased in pseudo-military tactical gear, isn’t going anywhere.

3) Compact Weaponry: It makes sense that our urban heroines would find it easier to maneuver through modern cities inconspicuously with small firearms and knives rather than bows and arrows strapped to their backs.