Ask any writer what tools are invaluable to their trade and it’s likely they’ll answer mostly in abstracts. For example, a good memory, an ear for dialogue, and a familiarity with the beats of a well-constructed sentence could all be prized tools for any writer. Physical, concrete tools favored by writers are usually complicated pieces of technology that only a very slim margin of working writers can afford.

But it seems these days that fewer and fewer writers are giving thought to one of the most invaluable tools of all: their workplace. Any craft requires a station; the carpenter has his workshop, and the painter his studio, so the writer must also have a place of creation, a peaceful sanctuary that allows mental abilities the room for action.

My own workplace is a great example of what any writer needs to get through the day-to-day toil of attempting literature. Come with me, and I’ll guide you through its many components, detailing how each article lends itself to my work. Follow my advice, and perhaps you too can create your own literary asylum, one that will help you survive both in the writing world and the physical one, protecting you against the many foes your writing will doubtlessly enrage.

Let’s begin simply. The first thing any good, dependable workplace needs is a sturdy roof. You see, when I was a boy my grandfather would always tell me: “Christopher, son, if there’s one thing you’ve always got to watch out for, it’s the sky. The sky is where the sun lives, and sometimes things come out of it, like rain, and birds. You should always fear the sky, my boy, always.” And I’d say, “My name’s not Christopher,” and then old grandfather would burst into tears and lock himself in the bathroom, just like he did every morning.

But what he said is true: you are going to want to have something between you and the sky, preferably at all times. Observe: 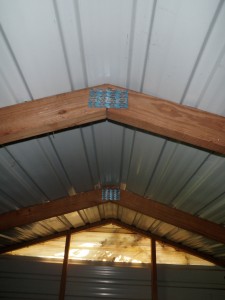 As you can see, I have a very splendid roof, but don’t despair; not every workspace requires a roof as splendid as mine. Why, a piece of cardboard, or a bridge, or even a chain-link fence covered in leaves and animal skins can work just as well. I think Hemingway used that last one.

But a roof won’t be enough for your literary sanctuary. You’ll also need a door. 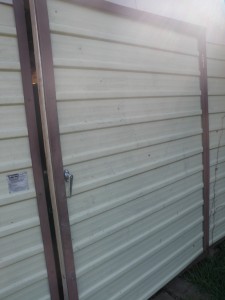 Doors are important, because as a writer people are going to come at you in the night. You can try and barter with them, I guess, but in my experience not many of them speak English. A good door is a better solution, I think. I’d advise anyone who’s considering a literary career to have one, or maybe several in a row, like in a bank vault, but I can’t figure out how that would work just yet. Maybe there would be pulleys? Someone get on this, and let me know what you come up with.

But a door by itself isn’t good enough. Anyone can just go up and open it. That’s why every writer needs a lock. 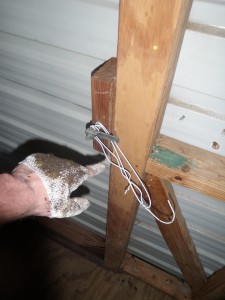 Many people will tell you to buy a lock in a store, but that’s silly. Most of the people who try to break into your workplace are looking for food or a place to sleep in safety, or maybe they want to kiss you on the mouth and you don’t want them to do that. These are simple needs, and so require a simple deterrent. Here you can see that I’ve used my lithe, masculine hands to twist a common clothes-hanger into an efficient locking mechanism. You may worry about ruining a perfectly good hanger, but I wouldn’t – most writers, like me, are unable to afford any clothes beyond the ones they’re wearing, which makes any hanger unnecessary. 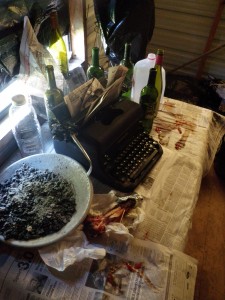 And here we have my work desk. In the center you can see my writing-machine. It works pretty okay. As you can tell, I’ve loaded it with common newspaper. This is an efficient choice because many newspapers are already covered in words, so hurray! less work for me. Sometimes my editor complains because the words on the paper aren’t the ones he wants to read, or they don’t make any sense, but what’s that guy going to do about it, he’s in a wheelchair. (EDITOR’S NOTE: We have no idea who he is referring to here.) 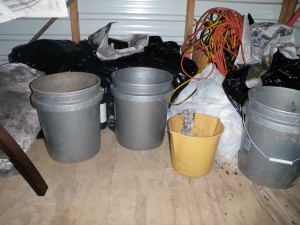 Buckets are basically the best. They’re the most important tool a writer can ever have, even more important than any actual writing tools. If a bucket is rightside up, you can place things in it. If it’s upside-down, you can put things on top of it, or use it for a musical instrument. If you have enough dough, you can also use an upside-down bucket as a cookie cutter for extraordinarily large cookies, I guess, if you want, though I don’t know why you would.

Let’s take a look at some of my buckets: 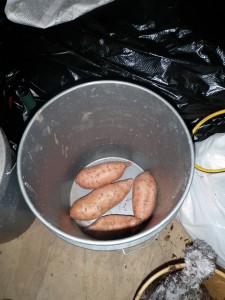 Here’s my bucket of yams. Yams are a great food for literary folk. They don’t go bad quickly, and they come right out of the ground, so you know they’re trustworthy. Sometimes looking at the long, skinny yams makes me feel all funny inside, but overall yams get a thumbs up from me, as a writer. 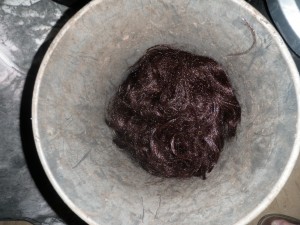 Here’s my bucket of hair. I always like to shop local, so a good part of it is mine. 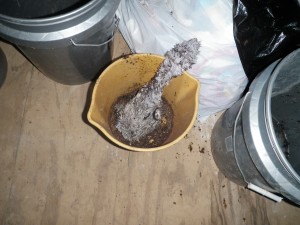 I forget what this bucket is for. 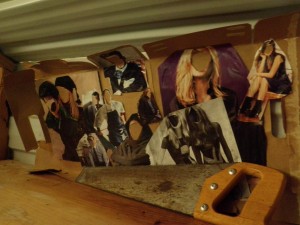 This is my dream-board. Each day I look at the dream-board and imagine what the people’s faces are like. Sometimes they’re happy with me, but most of the time they aren’t, especially after what happened on the bus last Thursday, even though that old lady had it coming. But overall the dream-board people are like the police – they just don’t listen. 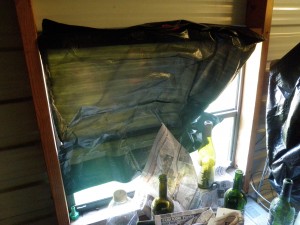 Here’s my window. I use it to make sure the world’s still going on outside. It usually is, most of the time. 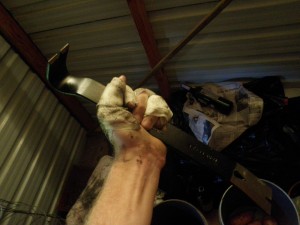 This is my crowbar, which is pretty handy for killing raccoons. I know what you’re thinking: you’re envious of me because raccoon meat is some of the most prized meat in the world. Well, friend, you’ve bought into an urban myth – raccoon meat is actually riddled with terrible parasites. I only kill raccoons in defense, or to show dominance to whoever might be watching, or maybe just because it’s Thursday. 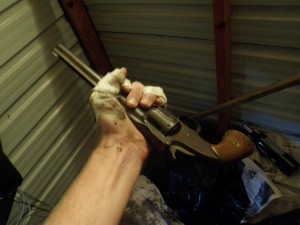 This is my flashlight. It’s not very good, though – it only lights things up for, like, a second or two. But like many writers I’m too poor to afford a better flashlight, and fire just confuses me. How does that stuff work, anyway? Like magnets, scientists are still figuring it out. 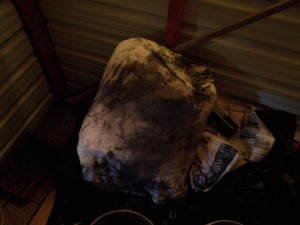 This is my pillow. You can put delicate things on it, like an egg or a small bag of delicate things, or you can use it to muffle screams. (Yours or whoever’s.) I wouldn’t use pillows for sleeping, though, because like raccoon meat they’re infested with terrible parasites that would really like to be inside you, and that’s the pits. 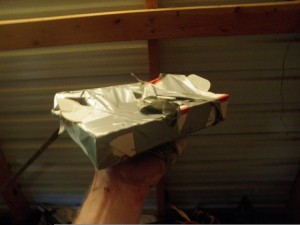 This is the box I keep the god in. He didn’t like me taking pictures, but we talked it out. This is another great rule of writing: make sure to reasonably talk out all your problems. Another great rule is to never trust anything a god says, especially if you have them trapped in a box against their will. They’re pretty sneaky, and they don’t forget. 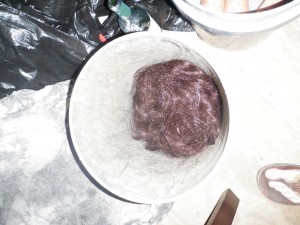 This is my bucket of hair again. I’m really proud of it, I just can’t help showing it off, I’m sorry. 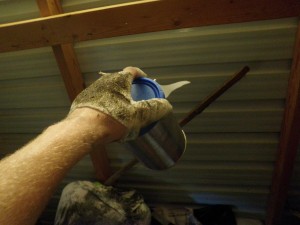 This is my can of crickets. They help me sleep at night, so then I can write better the next day. When they really get going they sound like many women talking quietly in a small room, only the crickets don’t tell horrible lies.

And that pretty much sums it up. Now, I know what you’re thinking. You’re thinking: “Christopher! This is so much complicated stuff! How will a poor, unimaginative dolt like myself ever manage to collect all of this incredibly specialized material?”

And to that I say: I told you my name isn’t Christopher, old man, and don’t look me in the eye, I told you I hate it when you look me in the fucking eye! But more specifically, there is a silver lining at the end of this tunnel. What’s that? Why, it’s the writing, of course! Yes, the writing. How could you forget the writing? You’re so worthless, no one could ever love you.

Let’s take a look at the product of all of this careful planning, the child birthed in these calming surroundings – my novel! It’s still in development, but I think it’s coming along splendidly: 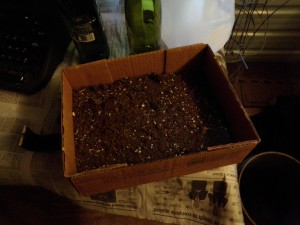 And that reminds me of a special little writer’s tip: make sure to keep your work in progress sleeping in a box of earth. You don’t want them waking up on you and getting away or, worse, scheming with any gods you keep in any boxes. For that sake of all that’s good and holy, you definitely don’t want that.

And that’s all. I can’t imagine any writer needing anything more than the bounty of ideas I’ve laid out here. With these simple tools, you should be able to fashion a dark, dank, womb-like structure of your own for you to burrow into and curl up in, mewling like a dying raccoon, and then you can allow your brain to wander in relative safety. Feel free to use your writing paradise for purposes beyond writing, too – why, you could use it to cry in safety, write letters to the government, or recover from multiple stab wounds. Now get going, young writers! Start collecting all the hair you’d ever need, and pulling yams from the soft, sensuous earth! The future awaits!

…just make sure to stay out of my fucking stuff.