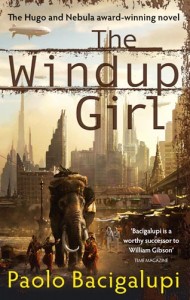 Time Magazine named The Windup Girl by Paolo Bacigalupi as one of its ten best novels of the year. And the book has also won an extraordinary five of 2010’s major international SF awards: the Hugo, Nebula, Locus, Compton Crook Award and John W. Campbell Memorial Award.

To take advantage of the huge buzz for this book (read a free extract HERE), Orbit is taking the unusual step of releasing the ebook edition immediately, as the fastest way of getting this important work to a UK audience. The paperback print edition will be out later, from 2nd December. We are very excited to publish this in the UK, as the extraordinary word-of-mouth excitement for this work in the States has been tremendous and now UK fans will have access to this wonderful book.

The Windup Girl is Paolo Bacigalupi’s debut novel, and it’s both a heart-stopping dystopian thriller and a razor-sharp vision of our near future. The story is set in a chilling near future Thailand, where calories count as currency with the world’s foodstuffs becoming depleted. It is an action-packed adventure with a complex plot weaving conspiracy and forbidden relationships. But it’s also a politically acute commentary on our own world.

Orbit is absolutely delighted to welcome Paolo Bacigalupi onto the list, who is being hailed as one of the most visionary authors writing in this field today. And Paolo had this to say on his UK publication:

Lastly, here are just some of the accolades we’ve seen for the book:

Time Magazine:
‘Bacigalupi is a worthy successor to William Gibson: this is cyberpunk without computers’

The Washington Post:
‘Not since William Gibson’s pioneering cyberpunk classic, Neuromancer (1984), has a first novel excited science fiction readers as much’

Publishers Weekly:
‘One of the finest SF novels of the year’

Techland:
‘It’s ridiculous how good this book is’