As a writer you take your inspiration wherever you can find it – from everything you read, watch, play, experience and particularly like or don’t – and I’ve always found myself as much influenced by film, TV, and computer games as I am by books. In writing The Heroes, then, the fantasy war-story of a single great battle told from various points of view on both sides – and which I’ve occasionally pitched as Lord of the Rings meets A Bridge Too Far – war films, and scenes of battle of all kinds, from the fantastic to the brutally realist, were just as much on my mind as books on the subject. Here are some of my filmic touchstones for summoning up a realistic fantasy battle… 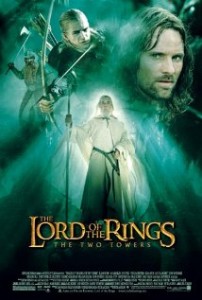 Perhaps the most famous battle scene in all of sword-based fantasy fiction is brought triumphantly to life in Jackson’s adaptation. The second film as a whole lacks quite the mastery of the first, but there’s no knocking the battle as King Theoden’s riders are besieged in an ancient fortress by Saruman’s army of Uruk-Hai. Fantasy film offers no more complete and compelling vision, or indeed anything that comes close, and the trilogy was, for me, a watershed moment for the fantasy genre. Suddenly, wizards could be cool. And very profitable. Also features a man with fake ears surfing down some steps on a shield but, hey, you can’t have everything.

CONAN THE BARBARIAN – “What matters is that two stood against many.”
IMDB 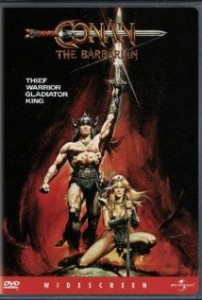 Conan faces the might of Thulsa Doom (complete with henchman who look uncannily like escapees from an aging metal band) in the midst of an ancient burial ground with nothing but his sidekick Subotai, a big spike on a stick, about fifteen axes, and a classic score from Basil Poledouris. Long on muscle, short on irony, but Conan the Barbarian (and absolutely not its wretched sequel, Conan the Destroyer) was a fantasy film prior to Lord of the Rings that didn’t look as if it was entirely made from cardboard. With the possible exception of Excalibur, you can count the others on the fingers of no hands.

WATERLOO– The Charge of the Scots Greys
IMDB 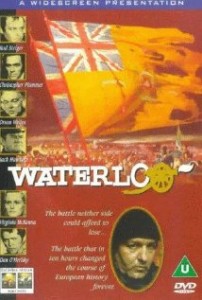 The magnificent but doomed charge of Wellington’s heavy cavalry begins as a noble spectacle and ends in disaster as the horsemen are routed by French lancers. General Ponsonby entrusts his pocket-watch to an aide so that it can be passed on to his son after his death. The aide gets killed anyway and the watch trampled into the muck of the battlefield. A wonderfully inglorious metaphor for the futility of war. Not sure about Rod Steiger as Napoleon, though. That’s a bit of a stretch. 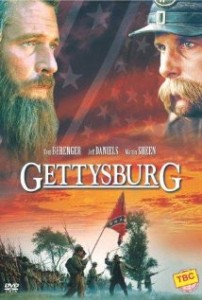 Colonel Chamberlain and the 385 men of his depleted 20th Maine Regiment are sent to recuperate in the safest part of the battlefield – a rocky, wooded little hill on the extreme left of the Union position. There they come under sustained attack by the Confederates and, vastly outnumbered, fight one of the most famous and important actions of the American Civil War. Finally – hard pressed and out of ammunition but knowing the battle might turn on their actions – the order to fix bayonets and charge is given. Rousing. 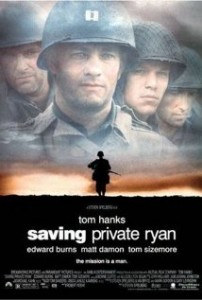 Spielberg’s hellish vision of the fight for the Normandy beaches felt like a real game-changer in its depiction of battle – gory, visceral, intimate, chaotic, terrifyingly random – and weighs in on pretty much every list of great battle scenes. Including this one. The influence of its visual style (bleached-out colour palette, jerky, hand-held camera, and fast shutter speed causing flying soil – and body parts – to seem frozen in the air) can be seen on pretty much every depiction of World War II since, notably in the TV series Band of Brothers, which features several fantastic battle scenes of its own. Harrowing. 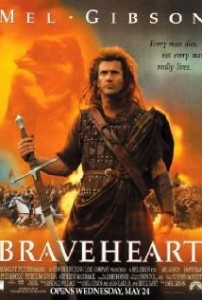 OK, so the hair is a little odd, the speeches verge on the cheesy, the history is creaky round the edges, and Mel Gibson appears to have since gone (or always been) mental, but the battle scenes in Braveheart still get the pulse racing some fifteen years after the film was released, especially the magnificent battle of Stirling. We’d seen medieval melees before, but they never looked so violent. Big spears, painted faces, lots of shouting, snappy editing, crunching sound effects and blood spraying the lens from all angles. Pass me another claymore, would you? This one’s gone out. 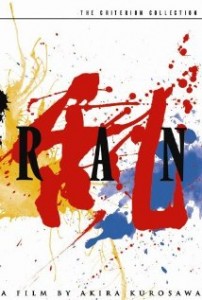 Kurosawa had already proved himself a master of black and white battles on every scale from duels, to skirmishes, to epic set pieces in films like Seven Samurai, Kagemusha, and Throne of Blood. But in Ran, his take on King Lear, in which an aging Daimyo foolishly surrenders his power to his two treacherous sons, colour adds an extra dimension. Gunsmoke drifts, mighty castles burn, and hordes of brightly-coloured samurai, back-flags snapping, flow like rivers in some of the most immense, stirring and, well, beautiful (if that isn’t a contradiction in terms) battle scenes ever filmed. 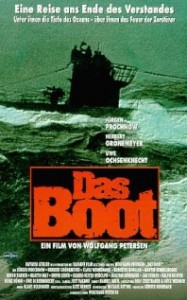 At the opposite extreme from the beauty and scale of Ran is the ugly claustrophobia of Das Boot, the German story of a U-Boat crew late in the Second World War featuring a towering performance from Jurgen Prochnow as the Captain. Beneath the waves war is shown to be a scrawny, oily, cramped, mostly unglamorous, occasionally horrifying and entirely psychological affair. The enemy scarcely appears, but the threat of death is ever present. Sweaty adam’s apples bob as men stretched past breaking stare up in horror at the creaking hull. Mein Gott, don’t let that depth dial go into the red…