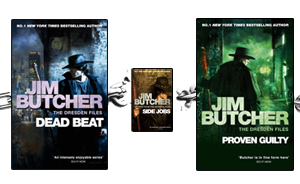 Something Borrowed is a short story from my new Dresden Files anthology Side Jobs (originally in My Big Fat Supernatural Wedding, edited by P.N. Elrod). The story takes place between Dead Beat and Proven Guilty.

I wrote this for the very first anthology in which I’d ever been invited to participate. I’d met Pat Elrod at a convention and thought she was quite a cool person, and when she asked me to take part in her anthology, I was more than happy to do so.

When I wrote this story, I was thinking that the Alphas (a group of werewolves who often provide great backup for Harry at difficult moments) hadn’t gotten nearly enough stage time in the series thus far. It therefore seemed like a good opportunity to give them some more attention, while at the same time showing the progression of their lives since their college days, which I felt was best demonstrated by Billy and Georgia’s wedding.

Inane trivia: While I was in school writing the first three books of the Dresden Files, my wife, Shannon, watched Ally McBeal in the evenings, often while I was plunking away at a keyboard. I didn’t pay too much attention to the show, and it took me years to realize I had unconsciously named Billy and Georgia after those characters in Ally McBeal. Who knew? TV really does rot your brain!