We are very pleased to announce that we have acquired two more books from Daniel Abraham– the as yet untitled books four and five of The Dagger and the Coin. Orbit will be publishing the entire series over the coming years and we are committed to supporting and building on the great success that Daniel has already achieved with the launch of The Dragon’s Path. 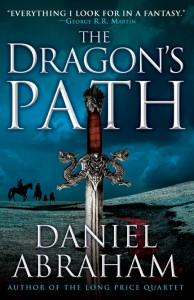 “Daniel Abraham’s new novel cements his status as the literary successor to George R. R. Martin.” — Grasping for the Wind

“Comforting yet complex, The Dragon’s Path is a textbook example of how to do meat-and-potatoes fantasy right.”– The A.V. Club

“A pleasure for Abraham’s legion of fans.”— Kirkus

“Prepare to be shocked, startled, and entertained.”— Locus

“With a deft and light hand, Abraham questions and explores the fantasy world assumptions most authors take for granted, telling an enjoyable and genuinely innovative adventure story along the way.”— Publishers Weekly (Starred Review)

“The Dragon’s Path is without a doubt one of the most anticipated fantasy books of the year… Abraham’s latest featured in the ‘Most Anticipated’ lists right up there with the new Abercrombie or Rothfuss.”–LEC Book Reviews

“Daniel Abraham has been a kind of King-in-Waiting in the fantasy genre for the past few years… Now he’s back with an epic new fantasy series, Dagger and Coin, that might indeed put him on the throne.”– Jeff Vandermeer

“(A++) A  first superb installment in a series that has established itself already in my top level of current ongoing fantasy series and moreover one I easily see becoming one of my top-top if the promise implied here continues to be fulfilled.”–Fantasy Book Critic

“Even in a year stuffed fat with triple A releases (Abercrombie, Rothfuss, GRRM, et al) The Dragon’s Path is sure to appear on many people’s “Best-Of” lists for 2011. I know it will appearing on mine.”–Literary Musings

“This is a fantastic start to a new series, and I loved it!”–Reading Fairy Tales