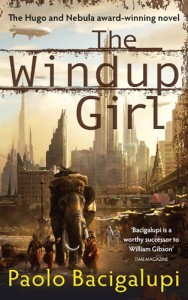 In Part 1 of our interview, Hugo and Nebula award-winning author Paolo Bacigalupi discussed the background to his stunning debut novel THE WINDUP GIRL and his concerns for a future where fossil fuels have run dry.

In this second instalment, Paolo talks about the practicalities of writing, why he became an author and what the future may hold in terms of his own work.

Perhaps unusually, you share your workspace with another writer – how do you use each other as sounding boards and for help with all the issues that crop up during the writing of a novel?

I think we alternately inspire each other, and get on each other’s nerves, but one of the benefits of having another writer around is that when you get stymied, you can go out for a walk together, and talk over the book, and sometimes that process of talking out loud gets you through the confusion.  I was just recently down in Mexico with another group of writers on a sort of writer’s retreat, and it was quite inspiring. Just being surrounded by a bunch of other people who are cranking out their books and who aggressively focused on building something out of nothing is hugely inspiring. Over two weeks I wrote an astounding number of words, and part of it at least had to do with being around so many other people who were working on books, and for whom there was no question that they were going to make up a story, and that their stories would be read, and that they weren’t crazy to be doing it.  It’s hard for me to have faith in my stories as I work on them. Hard to believe they should be written. Hard to believe that they’re worthwhile. Hard to believe that they aren’t stupid.  Being surrounded by other writers ameliorates that, for me, at least.

Did you always know that you wanted to be a writer, and what would you be doing if you were not?

I didn’t know that I wanted to be a writer, actually. Not for a long time. I only started writing as a hobby, to avoid thinking about my day job.  I was doing web development work, and I hated it.  Writing was an escape.  And then it became an obsession. And then it became the thing that I kept quitting my day-job to do.  It sort of took over my life over time, but when I was in college and starting out into the world, I thought I was going to work in business, or maybe banking, or technology, or maybe…. Let’s face it, I was pretty confused.  At this point, I think the thing that interests me most is economics and how it interacts with sustainability, and the thing I enjoy the most is gardening.  Can I have a job that puts those two together? Maybe with some international travel to round it out?

Both of your books are SF novels (or ‘Biopunk’ as you call it) – do you ever see yourself writing in other genres, such as fantasy?

Actually, I don’t call it biopunk. That’s a moniker that’s been applied to some of my stories, along with “dystopian” and “post-apocalyptic.” None of which quite feel like a perfect fit, exactly. I don’t really think of my stories as categories at all, really.  At one time, when I was asked, I thought I rather liked the term  “Agripunk” for stories like The Calorie Man and The Windup Girl, because while bioengineering is central, the thing that I care about is the interaction between genetic engineering, food, intellectual property and big agricultural corporations.  Ultimately, though, when I think about the kind of science fiction I write, I think of it more as fear fantasies, or “if this goes on,” stories.

Interestingly, as far as writing fantasy goes, yes, I am thinking about writing some.  I recently wrote a novella called “The Alchemist,” which was an attempt to talk about some economics and sustainability questions (those again!) using fantasy tropes. It was fun, and I think there’s more that I can do with the world, so I expect I’ll be revisiting it, in longer form.

Many thanks again to Paolo for his time!