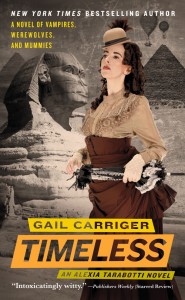 It is with a mix of joy and sadness that I launch the cover for TIMELESS by Gail Carriger. Joy, because I have loved working on these covers so much, and I happen to be a nerd about things ancient Egyptian, so Alexia Tarabotti + Pyramids = Squee. However, it is sad because this is the final book in the adventures of Alexia Tarabotti!

Of course, that doesn’t mean the end of our Lady Maccon. Did you hear about the Yen Press manga Soulless adaptation being created as we speak? The artwork is amazing! I’ve seen the cover and first chapter, I just can’t wait to see more…Trust me, even if you’ve never thought manga was your thing, you have to keep tabs on this book as it develops. Stunning work, and bravo to our Yen Press brethren.

As usual, we have a fabulous image of The Lady Maccon, portrayed by Donna Ricci, the captain of the steamship we call ClockworkCouture.com. Alexia in her explorer’s gear was shot by Pixie Vision Productions, who was also responsible for documenting the awesome Afternoon Tea that Gail and Donna co-hosted recently in L.A. (There’s a great fan writeup of the event here). I so love collaborating with people active in the world of Steampunk when we’re doing steampunk and victorian titles (hmm, foreshadowing alert for next season perhaps?). Everyone already knows the lingo, they always catch my chronological aberrations, and even better, they always add things to the books that I would never have thought of on my own.

So without further ado, here’s a teaser for Timeless…

Look, there’s some serious spoilers below if you’re not up to date on your reading so far, so make sure and get caught up at least thru Soulless, Changeless, and Blameless before reading on! Highlight the white text below if you’re absolutely sure you’re ready!

Alexia Tarabotti, Lady Maccon, has settled into domestic bliss. Of course, being Alexia, such bliss involves integrating werewolves into London High society, living in a vampire’s second best closet, and coping with a precocious toddler who is prone to turning supernatural willy-nilly. Even Ivy Tunstell’s acting troupe’s latest play, disastrous to say the least, cannot put a damper on Alexia’s enjoyment of her new London lifestyle.

Until, that is, she receives a summons from Alexandria that cannot be ignored. With husband, child, and Tunstells in tow, Alexia boards a steamer to cross the Mediterranean. But Egypt may hold more mysteries than even the indomitable Lady Maccon can handle. What does the vampire Queen of the Alexandria Hive really want from her? Why is the God-Breaker Plague suddenly expanding? And how has Ivy Tunstell suddenly become the most popular actress in all the British Empire?

And here one more time, is the whole series of covers together, with a big version of Timeless: 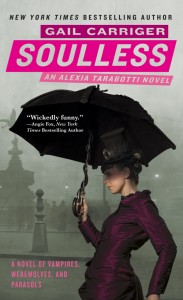 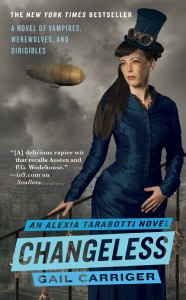 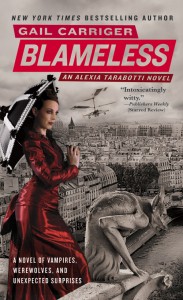 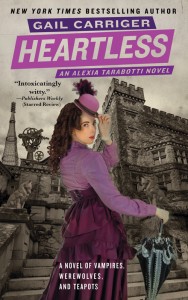 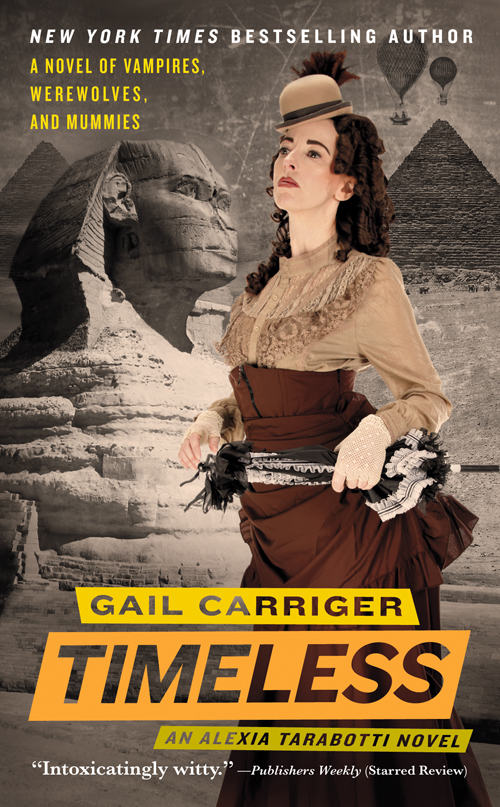