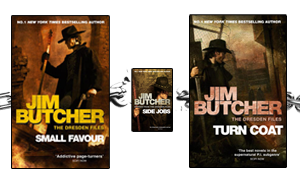 The Warrior is a short story from my new Dresden Files anthology Side Jobs (originally in my novelette from Mean Streets). The story takes place between Small Favour and Turn Coat.

Once upon a time, when moving into a new neighborhood, I spent a few days meeting the new neighbors. Nothing big, just visits to say hello, introduce myself to the other family with children my son’s age, another family with a high-school-aged daughter who often babysat for the other families on the street, the usual sort of thing. I had a bunch of innocuous interactions with them that didn’t look like anything special – at the time. Fast-forward five years. Over the next few years, I came to learn that some of the most inane, unimportant little things I had done or said in that time had impacted several of my neighbors in enormous ways. Not necessarily good or bad, but significantly, and generally in a positive fashion, or so it seemed to me.

If I’d chosen different words to speak, or timed my actions only slightly differently, it might well have altered their lives – and if I hadn’t been paying close attention, I might not have realized it had happened at all. It was my first real-life lesson in the law of unintended consequences – and the basis of my belief that big, important things are built from small and commonplace things, and that even our little acts of petty, everyday good or evil have a cumulative effect on our world. A lot of religions make a distinction between light and darkness, and paint portraits of dramatic battles between their champions.

But maybe the ‘fight on the ground’ is a lot more common than we ever really think. It happens every day, and a lot of the time we might not even be aware that it’s going on – until five years later, I guess. Our smallest actions and choices matter. They tell us about who we are. That was the idea I tried to carry into The Warrior. That, and the idea that what seems like a good thing or a bad thing might not be either, seen from another point of view. Many readers were upset with Michael’s fate at the end of Small Favour – how horrible that a character who was basically so decent got handed such a horrible fate. But judge for yourself how tragic it was from his point of view …