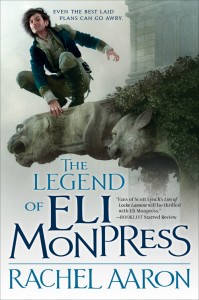 One of the best parts of my job is getting to collaborate with fantastic artists on covers. And one of Orbit’s favorites is the stellar Sam Weber. When I heard we were going to collect the first three Spirit Thief books into an omnibus edition I knew I wanted to give Sam a crack at creating his version of the incorrigible rogue & sorcerer Eli Monpress. So here it is, The Legend of Eli Monpress by Rachel Aaron. It’s out in February in satisfying tome-size trade paperback. This edition collects The Spirit Thief, The Spirit Rebellion, and The Spirit Eater, and set’s the scene for the next story, The Spirit’s War, out in June 2012. 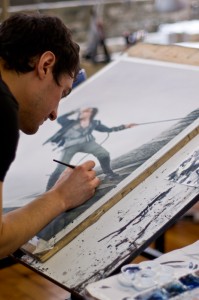 And speaking of The Spirit’s War, we know you guys are going to love this cover so much that we already have Sam working on the cover for the new book. And Art Director Kirk & I snuck out of the office for a few hours and went to visit Sam at his studio and see the cover-in-progress! We also took along our trusty cameraman Eric Westpheling to tape a studio tour and chat with Sam about his process. That video will debut with the cover launch of The Spirit’s War in a few months, but for now, here are some images of our visit and a SNEAK PEAK at the next cover!

I don’t remember the first time I saw Sam’s art but here at Orbit we love that he can capture such a strong feeling of fantasy and adventure, yet in a fresh way and in his unique style. Our first project together was The Gaslight Dogs, which was a stunning cover, but I have of course also been jealous of all the lovely work he’s been doing for other clients as well. Especially that drop-dead-gorgeous Ender’s Game ebook. And I have to say I was curious to see exactly what his process was…the transparency & textures he gets in his illustrations just blows my mind. I definitely learned a lot. I guess you’ll just have to wait for the cover launch of The Spirit’s War to hear him explain it himself…

Meanwhile, after the jump you can see a few more still shots of Sam in action, as well as this cover BIG, and a better shot of the art-in-progress…and if you haven’t had the chance to “meet” Eli Monpress yet, do yourself a favor and download the first two chapters as a free pdf here. I know I’m not supposed to have favorites and all, but this series is definitely on my list of manuscripts that I bug the editors about when I know it might be coming in…My early comparisons to The Princess Bride and Locke Lamora are completely on-target with everyone I’ve recommended this book to. Eli is a fantastic antihero, and, guy or girl, you can’t help fall in love with him a bit. 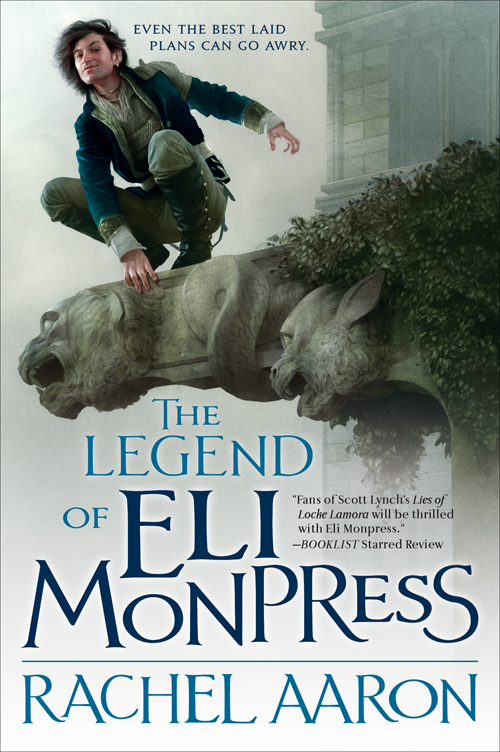 Here’s a teaser for The Legend of Eli Monpress:

The Legend of Eli Monpress …A tale of high adventure, romance, and larceny.

Thank you again to Sam for letting us visit and pester him with questions, his very patient studiomates for putting up with us, and Eric for recording everything!